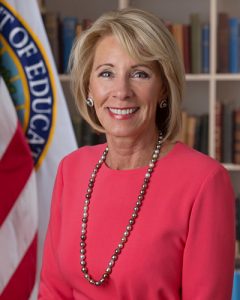 She described it as a “socialist takeover of higher education,” adding that the United States economy would be “ruined.”

“Somebody, somewhere pays the bill,” DeVos said. “And the bill is coming due. What we do next in education policy and in public policy writ large will either break our already fragile economy, or it will unleash an age of achievement and prosperity the likes of which we’ve never seen.”

Under President-elect Joe Biden’s education plan, public institutions will cover the cost of tuition for students whose families make under $125,000 per year. Additionally, as part of COVID-19 relief assistance, Biden supports removing $10,000 in federal student debt for all borrowers, according to The Hill.

What Can We Do to Stop Anti-Asian Hate Crimes?