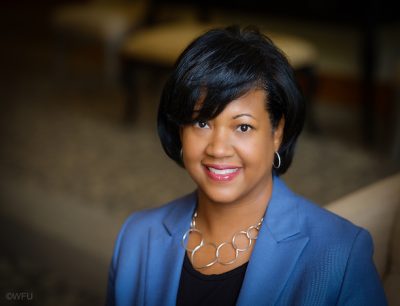 In addition to her three years as associate provost, Chavis, 46, has been teaching law – specifically in the realm of criminal law and criminal procedure – at Wake Forest’s law school since 2006. She founded and directs the law school’s criminal justice program and teaches a popular course called “Perspectives in Law Enforcement: Police and Prosecutorial Accountability,” an issue all the more timely, Chavis said, given ongoing calls for criminal justice reform.

“As a university administrator, I think it’s really important that I stay close to the university’s mission. And that mission is to educate students,” Chavis said. “When I’m teaching that class, it’s one of the highlights of my day.”

In her new and expanded role, Chavis – a North Carolina native – will continue to oversee approximately nine different offices at the university, such as the Office of Online Education, the Center for Advancement of Teaching and the Office of Civic and Community Engagement.

Dr. Rogan Kersh, provost at Wake Forest University got to know Chavis early into his tenure as the school’s chief academic officer.

“She’d already been here in the law school. And as I arrived, a lot of folks told me to seek her out as a real voice of wisdom in what was happening in and across the law school as well as the university more broadly,” he said. “I found her informal counsel very valuable from the start of my time as provost, and, when the associate provost for academic affairs job came open, I was delighted she responded to the call and all the more delighted she’s agreed to become vice provost.”

Chavis also manages certain initiatives at Wake Forest and serves as co-chair of the steering committee of the school’s “Slavery, Race and Memory Project.”

“Wake Forest University, as a Southern institution founded decades before the Civil War, has a history bound up with slavery and its tragic legacies,” according to the project’s website. “Attempts to recover, understand and reckon more fully with that complex past have accelerated in recent years and are collected in a many-faceted Slavery, Race, and Memory Project. She was instrumental in Wake Forest co-hosting the 2020 national Universities Studying Slavery conference.

Chavis cited her work with the project as one of her biggest accomplishments as associate provost and added that she will continue as committee co-chair in her new role as vice provost.

“I think the Slavery, Race and Memory Project is something that, to me, really stands out because it gave me the opportunity to work with a number of colleagues from across the university on a really important matter and gave us the ability to shape the project,” she said.

“As our country has experienced challenges related to systemic racism, our campus has also grappled with issues of diversity and inclusion,” she added. “But we have made great strides and I’ve been fortunate to be a part of a team of very dedicated colleagues that were all at every level hoping to make this really inclusive, educational environment.”

She noted that the project is one of the ways in which the school has proved unafraid to confront its history and diversity issues by connecting them to its academic mission.

Before she arrived at Wake Forest, Chavis was an attorney in Washington, D.C., having practiced law at D.C. law firms and later serving as a federal prosecutor in the U.S. Attorney’s office.

Before being associate provost, Chavis served as associate dean of research and public engagement at Wake Forest.

She holds a Bachelor of Arts degree from University of North Carolina – Chapel Hill and a law degree from Harvard University. She is also on the board of the Lawyers’ Committee for Civil Rights.