Announcing the nomination, Biden described Cardona as an “innovative leader” who would “eliminate long-standing inequities and close racial and socioeconomic opportunity gaps – and expand access to community colleges, training and public four-year colleges and universities to improve student success and grow a stronger, more prosperous and more inclusive middle class.” 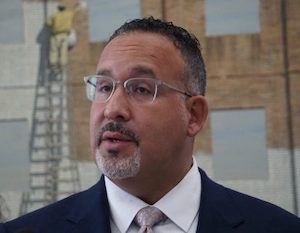 Cardona began his career as an elementary school teacher in Meriden, Connecticut, the same public school system he attended. He then worked as a principal for ten years before becoming Meriden’s assistant superintendent for teaching and learning in 2013.

“For far too long, we’ve let college become inaccessible to too many Americans for reasons that have nothing to do with their aptitude or their aspirations and everything to do with cost burdens, and, unfortunately, an internalized culture of low expectations,” Cardona said in his nomination acceptance speech on Dec. 23.

Higher education policy experts hope he’ll focus on the needs of low-income and underrepresented students, as well as the institutions that serve them.

“I’m actually heartened by his background,” said Dr. Stella M. Flores, associate professor of higher education at New York University and director of access and equity at the Steinhardt Institute for Higher Education Policy. “I think he’s someone that has spent time trying to understand inequality, and I hope that he brings that language and that sense of duty to the job in a very vocal way.”

She hopes Cardona comes in with a “clear understanding of who the new traditional student is,” she said. “It’s not the 18-year-old who goes straight into a four-year college with a dormitory. It’s going to be someone who’s low-income, who’s maybe stopped out a semester – or even a few years – and then is trying to reengage. Higher education practitioners understand that, but I don’t know if our policymakers do. We can’t have solutions for a student body that existed 20 years ago.” She thinks Cardona is perhaps uniquely situated to understand the “interdependence” of the K-12 and higher education systems and how inequities across sectors impact students’ career readiness in the long run.

“It’s all intermingled,” she said. “It’s all connected.”

Cardona’s time in K-12 public education may also translate into increased support for public higher education, especially community colleges, said Dr. James Earl Davis, Bernard C. Watson Chair in Urban Education and a professor of higher education at Temple University. Even if funding for public universities happens at the state or local level, the education secretary position comes with a “power of leadership and vision.”

Dr. Ivory A. Toldson, professor of counseling psychology at Howard University, hopes Cardona – and his future undersecretary – will prioritize increasing funds for minority serving institutions, not just entitlement funding but grants to build up their research infrastructure. Toldson is the former executive director of the White House Initiative on Historically Black Colleges and Universities under former President Barack Obama.

“We need to have a system that recognizes [minority serving institutions’] contribution to the future of this nation,” he said.

He also wants to see an emphasis on STEM (science, technology, engineering and math) education to help universities prepare underrepresented students for “jobs of the future, not jobs of the past,” especially in industries lacking in diversity, like tech.

From a college affordability standpoint, Davis hopes Cardona will extend the current pause on federal student loans in response to the pandemic – set to expire on Jan. 31 – and at least reduce student loan debt.

In general, he wants to see Cardona take a “disparate impact” approach to education policy, holding both K-12 schools and colleges accountable for racial inequities, like disparities in graduation rates, disciplinary practices and test scores.

But he expects a large part of the new education secretary’s role to be about “redirection and refocus,” undoing a “retreat from some long-held concerns around equity and access” under the Trump administration.

For example, Davis pointed out that the education department under Cardona will likely reshape current Title IX regulations, which afford more protections to those accused of campus sexual assault and harassment than Obama-era federal guidelines.

Flores worries about the time and resources these reversals might take, the “makeup curve” Cardona will have to face before instituting new higher education policies.

“How do we move forward at super speed,” she asked, “when so much that was positive has been dismantled?”