The percentage of adults 25 and older in Los Angeles County intending to enroll in college exceeds the California state average.

Since releasing its report, “Postsecondary to Prosperity: Examining California’s Opportunity Landscape,” California Competes has continued to release key data to fuel interest in policy and action to promote equitable access and student success. Last week, data about higher education in Los Angeles County drew attention, notably that 44% of adults have expressed an intention to enroll in college in the next two years. 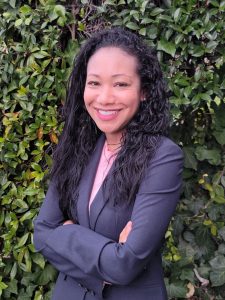 The Los Angeles County data was released to highlight information on the Postsecondary to Prosperity dashboard, a massive source of data made available by California Competes, which conducts higher education and workforce policy research to increase equity for Californians. The dashboard provides insights into disparities across the state.

“The goal is to elevate regional findings as well as data by race and ethnicity,” said Dr. Su Jin Gatlin Jez, executive director of California Competes. “The dashboard literally has thousands of data points. It’s our goal to curate pieces of information that people can engage in as per their interest.”

Since July, California Competes has received positive feedback on the dashboard, which provides information about higher education, employment and other areas such as home ownership and health insurance. For example, Black Californians are more likely to have completed an associate degree (44%) rather than a bachelor’s degree (24%). Bachelor’s degree attainment by region is greatest in Upper Sacramento Valley (34%) and Orange County (42%) and lowest in North-Far North (10%) and Imperial (0).

Jez said the data has been particularly useful for individuals and organizations that are trying to get a better understanding of the regional nuances around postsecondary access, workforce success and quality of life indicators.

“We hope to continually update the dashboard,” said Jez. “Over the last 10 years, California Competes’ research and our policy briefs analysis have been able to pinpoint the challenges that California’s higher ed system faces and the actions that policy makers can take to address them.”

The focus is on bolstering equity so all Californians can engage, contribute and succeed, said Jez, adding that some of 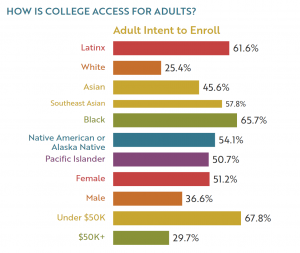 “We were able to break race and ethnicity into finer grained categories than we typically see,” Jez said. “California higher education has a critical role in addressing unequal opportunities and improving social and economic mobility for individuals and the state.”

“LA’s inequitable access to post-secondary education leads to significant differences in the region’s educational attainment by race, ethnicity and to the workforce and prosperity outcomes,” she said. “We see this across the state to varying degrees in each region.

Jez said that COVID-19 has exacerbated issues relating to access.

“There are millions of Californians who don’t have access to [the] internet,” said Jez. “There’s also the affordability aspect. We’re working on policy to expand more affordable internet. If someone qualifies for state financial aid, we should also make sure they’re eligible for affordable internet.”

Dr. Christopher Nellum, deputy director of research and policy at The Education Trust—West, said that the data from California Competes has proven useful.

“The important thing [about the dashboard] is that they are breaking down very important data and statistics with a regional focus because California is so vast and so diverse,” he said.  “The ability for parents, advocates, students and policymakers to have data that is specific to their region on issues such as prosperity, workforce and higher ed is incredibly important and it actually is filling a gap that the state has not yet addressed in a comprehensive way.”

On Youth Activism and My Active-Shooter Training