Growing up, Dr. Jameson D. Lopez, or “JD” as he prefers to be called, was no stranger to higher education. His mother — Belinda Lopez — was a longtime faculty member at American Indian College and his father, the Reverend Jim Lopez, was the school’s dean of students who later became the president.

Lopez literally grew up on a college campus.

“I knew about self-study and accreditation by the time I was 8 years old,” he says with a chuckle. “I remember helping the academic dean with his surveys when I was 16 or 17.” 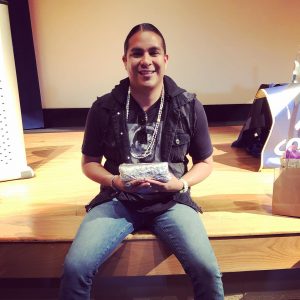 Lopez’s experience at American Indian College (as the son of two educators working there and later as an undergraduate student), further solidified his desire to become a researcher and college professor with a keen eye toward helping Native American students like himself.

Now, as an assistant professor of higher education at the University of Arizona, Lopez is doing just that, centering his research on Native American students. In the process, he is breaking new ground in developing national data sets about this demographic and is championing the importance of data sovereignty — the idea that Native people should be in control of collecting data about themselves.

“I don’t look at the research from a deficit approach,” says Lopez, who is a member of the Queechan (Kwat ’san) tribe. “Reading and math is important, but in the Native community, so is history, ceremonies and giving back. These are based in cultural values and are outcomes that we should be measuring.”

After serving in the U.S. Army as a platoon leader in Iraq in 2010, where he received a bronze star medal for actions in a combat zone, Lopez enrolled at Arizona State University where he earned a master’s degree in curriculum and instruction and a Ph.D. in educational policy and evaluation.

Since 2018, he has been an assistant professor at University of Arizona and is quickly making a name for himself, emerging as one of the nation’s top Indigenous quantitative researchers with expertise in the limitations of collecting and applying quantitative results to Native American populations.

“The uniqueness of what I do, is that I get to address statistical limitations and small sample size,” says the recently married father of two.

There is distrust, he adds, by tribal elders for outsiders who want to study their communities. In the graduate courses that he teaches, such as Indigenous Statistics and Survey Research, he is training his students on how to be respectful and sensitive to the needs of tribal communities.

He is also fortunate, he says, to be working in an academic department that has a social justice bent and pushes him to pursue his scholarship.

“We have a great group of scholars in the department and we bounce ideas off of each other and celebrate each other,” says Lopez, who is working on a book proposal around his current research and work.

In recommending Lopez as an Emerging Scholar, Drs. Jenny J. Lee, Nolan L. Cabrera and Regina Deil-Amen praised Lopez as “one of the most unique and dedicated scholars who has been a pleasure to call a colleague.”

“He unapologetically does his work with and for Native communities, bridging the frequently divergent areas of higher education scholarship and tribal engagement,” they said. “Dr. Lopez lives a life of service, is incredibly creative and is the epitome of what a colleague should be.

Words of wisdom/advice for new faculty members: “Don’t sweat the small stuff and don’t take yourself too seriously.”

This article originally appeared in the January 21, 2021 edition of Diverse and is one in a series of profiles about this year’s 2021 Emerging Scholars. Read about all of them here.

U of Arizona Projects $250 Million Loss, Will Implement Furloughs and Pay Cuts