With a focus on conveying anti-Black violence through photographs,  Zora J Murff’s work is inspired by how images function as social objects.

Some of his projects have focused on the juvenile criminal justice system, redlining in North Omaha and points of extreme anti-Black violence.

“Thinking about how those particular histories connect with police violence against Black individuals that we see sort of unfold in surveillance footage today,” says Murff, assistant professor of art at the University of Arkansas (UARK). “That body of work tries to use photography to connect those things. Looking at these different types of anti-Black violence that have been perpetrated throughout history, how do we understand that through images?” 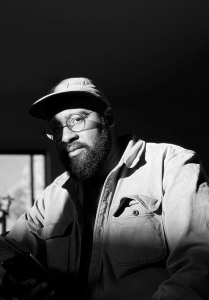 He has found that his work prepared him for the current conversations around racial reckoning within the United States after continuous acts of police brutality.

However, he has struggled to grapple with being called upon during this time to speak to that violence.

Murff has also found it challenging to be Black in academia.

“These environments were very much not crafted for Black people to thrive and survive in them,” he adds. “This being a sort of a crucial, pivotal moment, kind of asking ourselves, ‘Are we going to use this moment and all of these conversations that we are having now that we were not having before to produce actions towards legitimate change? Or is it just going to be more lip service?’”

His higher education career began after graduating with a master’s degree from the University of Nebraska-Lincoln.

Murff was drawn to UARK due to an opportunity to build a program rather than solely entering and teaching in an existing one. This is due to an endowment given to the School of Art, with the goal of becoming a “model for diversity, equity and inclusion in the arts.”

“Having this understanding that my research and my work, what I strive to do as an educator already addressed those things,” he says.

Murff entered UARK as a visiting assistant professor in 2018.

A year later, he became a full-time assistant professor, teaching subjects such as documentary photography and digital photography.

“I get to go into work every day and talk with students about art and help facilitate them in getting their ideas out,” he says. “It is just an absolute pleasure to wake up every day knowing that is what I do.”

In his undergraduate and graduate courses, Murff looks for ways to acknowledge art and the history of photography that has previously been overlooked or left out.

“Trying to find those voices who are writing about art in the present day, who are providing maybe different viewpoints,” he adds. “Coming at things with different kinds of lived experiences that are outside of these Eurocentric and heteronormative ways that we typically embrace in academia.”

Rebecca Drolen, an assistant professor of art at UARK, has found that graduate students, in particular, have resonated with Murff’s work due to his career experiences.

“He has been such a fantastic mentor to our graduate students,” she says. “[Showing them] how to get their work out in the field, how to present themselves and speak about their work. It has been really wonderful to work with Zora because the energy he brings has really invigorated the program.”

Over the years, Murff has published three monographs titled, “At No Point In Between,” “LOST, Omaha” and “Corrections.”

His work has also been featured in Aperture magazine, New York Times Magazine, The New Yorker and The Atlantic. Additionally, it has been displayed at the Gregory Allicar Museum, Museum of Contemporary Photography and the Studio Museum 127 Project Space.

Title: Assistant Professor of Art, Co-Area Head in the Photography Area, School of Art at the University of Arkansas

Words of wisdom/advice for new faculty members: “For any person who is of a perceived difference, I would really encourage them to find a network of people to help you feel supported in what you do. I think it’s really important to have individuals who can sort of commiserate with the day-to-day struggles of what it means to be in an environment that didn’t have you in mind.”

This article originally appeared in the January 21, 2021 edition of Diverse and is one in a series of profiles about this year’s 2021 Emerging Scholars. Read about all of them here.