So, what are you?

Can I touch your hair?

You should smile more.

It’s the buildup of slight, everyday microaggressions like those that take a heavy emotional — and physical — toll on people of color and women, says Dr. Teysha Bowser, an assistant professor in the Department of Professional Counseling at the University of Wisconsin Oshkosh.

That’s why she’s on a mission to ensure her students, many of whom will become future counselors, understand just how much such comments can damage a person’s mental health.

Bowser began studying microaggressions — or subtle and common instances of discrimination — as a master’s student in clinical mental health counseling at New Mexico State University. At the time, she was seeking a topic to pursue for a thesis but was struggling to find a direction. 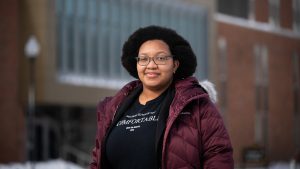 “I always knew that I wanted my focus to be with marginalized communities,” says Bowser, a Texas native who was known as the go-to empathetic listener of her family. “I knew I was passionate about things related to identity, I knew I was passionate about educational attainment, but I didn’t know how I was going to put all of that together or if it was even possible for me to put it all together.”

All it took was one professor who, after listening to Bowser share her interests, printed an article she thought might point Bowser in a direction. The article was on racial microaggressions.

“Once I read it, I was like, ‘This is everything that I want to do,’” says Bowser, who would eventually defend her doctoral dissertation titled “Gendered Racial Microaggressions, Racial Battle Fatigue and Intergenerational Learning with Three Generations of Black Women” at the University of Nevada, Reno, where she earned her Ph.D. in education-counselor education and supervision.

For her dissertation, she sat with three generations of Black women and listened to their experiences with gendered and racial microaggressions and the racial battle fatigue that followed. “Racial battle fatigue” is a term coined by William Smith, who developed the idea while thinking about the combat fatigue soldiers often experience, explains Bowser. The term acknowledges the psychological, behavioral/emotional and physiological responses that come from persistent experiences of racism.

“Constantly being in an environment where you’re experiencing racism, you’re always on high alert, like hypervigilant, and you don’t necessarily get the opportunity to let your body relax and rejuvenate,” says Bowser. “You spend a lot of energy really trying to decipher whether your environment is safe versus putting that energy toward your work, your schooling, whatever it is you’re trying to achieve.”

Finishing up her first year at the University of Wisconsin Oshkosh, Bowser says she tries to incorporate themes of racial justice into all of her courses and discussions. She wants her students to realize that racial trauma isn’t siloed to a single class but that it can intertwine with nearly all aspects of psychology.

As a Black professor at a predominantly White university, Bowser says she often challenges her students to question their own assumptions and behaviors — even if it makes them uncomfortable.

“I think that sometimes there’s this expectation that I don’t challenge them to really think about why they believe certain things, or why they react in certain ways but that I just kind of say ‘Oh that’s great’ and provide them with all the love and support,” says Bowser. “My role as an educator is to love and support, but part of that is also having them be accountable. So if they do have missteps that could be potentially harmful for future clients or future students, having them really explore and think about that [so they can] have an understanding of how we’re all influenced by societal factors.”

Bowser stressed that guilt and shame are not part of that process.

“I know sometimes when people hear about work related to my profession or other issues surrounding marginalized communities, the automatic assumption was that it’s being used to guilt people or shame them,” says Bowser. “And I would just hope that people understand that the work isn’t about that. The work is about ensuring that society’s image of greatness is actually achieved for all individuals. And that work is constant; we’re always trying to build and improve.”

This article originally appeared in the April 1, 2021 edition of Diverse. Read it here.