An urgent game of truth or dare kicked off The Association of American Colleges and Universities’ 2021 Conference on Diversity, Equity, and Student Success on Wednesday. The theme of the three-day, virtual conference is “Upholding These Truths: Equity, Diversity, and Democracy.”

This year’s keynote speaker, Dr. Lori Patton Davis, professor of higher education and student affairs and chair of the Department of Educational Studies at The Ohio State University, began by issuing uncomfortable truths about the current reality of diversity work in academia. 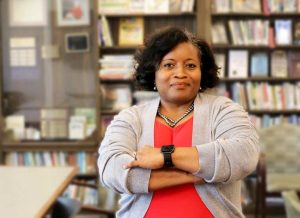 She posed the question: When it comes to diversity work, who is actually doing the work?

While the assumption is that university leaders — the ones who are often quick to issue public diversity statements following high-profile incidents of racism — are often the ones behind the scenes, Patton Davis said most of the people “cleaning up the mess” are marginalized staff, faculty and students.

“When I think about accountability and who’s doing the work and who’s cleaning up the mess, I can easily direct my attention to people who look like me, and other minoritized communities who continue to be the most significant driving force of change in higher education,” said Patton Davis. “Yet, these are the same people who are devalued, marginalized and treated inequitably.”

Rather than being recognized or compensated for their efforts, Patton Davis says these minoritized communities are instead placed on the margins of academia and treated as “The Help,” referring to the twentieth century Black women who often worked as domestic laborers for wealthy white families, cooking and cleaning up after the family.

In using the term, Patton Davis added that she is also referring to the 2009 novel The Help and subsequent movie of the same name, featuring a White woman who forms a relationship with two Black maids amid the backdrop of the 1963 Civil Rights Movement. Appalled by the racism the two women endure as “The Help,” the White woman exposes their hardship by writing a novel, ultimately gaining recognition for her selfless pursuit.

“As is often the case, their stories and experiences were overshadowed by a White woman protagonist who learned from them,” she said, drawing a parallel to the overshadowed and undervalued work being performed by Black faculty, whom Patton Davis calls “The Help” of academia.

“Black women are hired in so many positions where they are expected to come in and save the institution, but [they’re expected] to do so with no real support,’ said Patton Davis. “Many institutions want the diverse hire, but it’s common to overload them with so much work that the job becomes untenable.”

She pointed to the case of Dr. Lesley Lokko who resigned as dean of the Spitzer School of Architecture at City College in New York last October after citing a crippling workload and lack of support.

“She was hired to basically save the school, but she faced sexism, racism and she ultimately resigned,” said Patton Davis. “… This is true for Black women who are leaders on their campuses, who are heavily involved, do a great deal of the heavy lifting, yet their activism and engagement is treated as unpaid labor.”

In response, Patton Davis concluded by issuing several urgent dares to her colleagues. Among them:

According to AAC&U President Dr. Lynn Pasquerella, Patton’s speech struck to the heart of what the conference hopes to explore this week: “the perceptions and the realities of diversity, equity, and what it means to educate for democracy in a changing educational and societal landscape.”

The conference, which has more than 1,700 registered attendees, will continue into Thursday and Friday, featuring a host of concurrent sessions, from “Designing Projects for Cultivating Empathy, Social Responsibility, and Activism” to “Embodying Racial Healing: Becoming Anti-Racist Educators in a Virtual Learning Community.”

“Together, we must reaffirm the role that a liberal education plays in fulfilling our nation’s historic mission of educating for democracy,” said Pasquerella. “… We know from our work with colleges, universities and communities across the country that racial healing and transformation presupposes truth telling.

“We’re here to acknowledge the truth of where we are as institutions of higher education, and as a society, and to strive in tandem to foster the next generation of leaders who will jettison once and for all the belief in a hierarchy of human value.”