Dr. Esther Ngumbi began her life’s work as a child alongside a river in rural Kenya.

At just seven years old, Ngumbi wanted a hand at farming, so her parents gave her a small strip of land near the river that she could plant cabbage on. Though her parents were both passionate educators, their incomes from teaching alone could not sustain her immediate and extended family, so her parents supplemented their earnings through farming.

Ngumbi would tend to her cabbages each day and often help her parents farm, watching as the crops 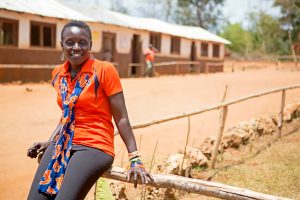 sprouted from the soil, hopeful and green. But then, “halfway through the season, insects would come and go through our crops, and sometimes what insects hadn’t taken away, drought would,” says Ngumbi, now an assistant professor of entomology at the University of Illinois at Urbana-Champaign. “I would watch this as a kid. A lot of our hard work — waking up in the morning and going to the farm — would be eaten by insects.”

The agricultural problems facing her family were not unique but were endemic to other farmers in her community, and she realized this early on. Even from a young age, Ngumbi wanted to know what the insects were and how farmers could control them. She wanted a career that could help her community grow plentiful food amid challenging circumstances and a changing climate.

Watching her parents sacrifice their own meals to pay for her and her siblings’ school fees, she understood that higher education was key to finding that career. So, after finishing high school, she continued onward to Kenyatta University in Nairobi where she earned a bachelor’s degree in biochemistry and zoology and a master’s degree in entomology. Then, through a highly competitive international fellowship awarded by the American Association of University Women, she went on to receive a doctoral degree in entomology at Auburn University in Alabama.

Receiving a Ph.D. marked a major milestone, not just for her, but for her rural hometown, Mabafweni, in southeastern Kenya. Ngumbi had become the first woman from the 20,000-person community to hold a Ph.D.

Though she was excited to have earned something that once seemed “an elusive dream,” knowing her parents couldn’t afford to see her in cap and gown reminded her that, “yes, I was graduating, but I was still first generation, we were still poor and poverty was still one of the defining things.”

“It doesn’t feel good to be the only person,” she says, continuing, “It hit me so hard and I remember crying because I decided I would do anything and everything that I could to ensure that I would pave the way for many, many more [students like me]. I decided that something had to change.”

She spared no time. Upon earning her Ph.D., Ngumbi and her parents founded the Dr. Ndumi Faulu Academy, a school for children in Kenya, in 2012.

“We started small with 14 children,” she says. “We were studying in mud classrooms, but we were very happy because at least the children were getting an education, at least they were seeing me as a positive role model. … They know that if I did it, they can do it as well. It just gives me great excitement because we are giving them what has given me so much power and freedom.”

Today the academy has grown to include permanent classrooms, greenhouses, a science lab, a library and a growing enrollment currently at 110 students.

What’s more, the academy is not the only nonprofit Ngumbi has founded. Two years later, in 2014, she also created Oyeska Greens, a startup that teaches smallholder farmers in and around her community how to use updated technologies and methods in agriculture. 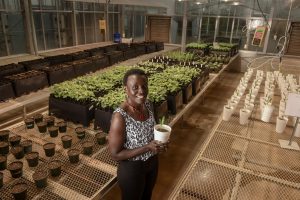 “It’s sometimes so difficult for farmers to try new technologies, to try new seeds, because there’s a risk involved. … If it doesn’t work, that means that your families are going to be hungry and your livelihood is at stake,” she says. “So because I have the financial capabilities, we decided that we can use our farm to demonstrate and to continue sharing to the community everything that we know.”

Aside from operating two nonprofits, Ngumbi spent several years working as a post-doctoral researcher at the Department of Entomology and Plant Pathology at Auburn University, producing research that would lead to the issuance of two U.S. patents for agricultural technology.

Then, one day amid her work, she received a phone call from a number she didn’t recognize.

Though she rarely answered unrecognizable numbers, Ngumbi decided to take it, and she’s glad she did. On the other end was Dr. May Berenbaum, a world-renowned entomologist and a recipient of the National Medal of Science. Berenbaum asked Ngumbi to come to the University of Illinois at Urbana-Champaign as a postdoc researcher and potentially as a faculty member.

Now at the University of Illinois at Urbana-Champaign since 2018, Ngumbi continues to produce an abundance of research, currently focusing on finding beneficial soil microbes that improve crop production, alleviate drought stress in crop plants and provide sustainable pest management.

But Ngumbi’s work isn’t constrained to the ivory tower. A passionate science communicator, she’s penned bylines in the likes of The New York Times, Al Jazeera, Time magazine and NPR, with the goal of making her science as publicly available as possible.

“It takes so much to eventually get a science paper out, but yet we settle for … only 10 or 20 people in our field that ever get to see something that took three years to do,” she says. “I thought that was a big shame, so that was a big moment of, ‘Okay, it’s important for a scientist to at least learn how to communicate and find multiple ways to do so.’”

Earlier this year, the American Association for the Advancement of Science named Ngumbi the 2021 recipient of the Mani L. Bhaumik Award for Public Engagement with Science, an annual honor recognizing a scientist who has made significant contributions to public engagement with science.

“The public deserves to know what scientists are doing,” she says. “Scientists must step out of the ivory tower and engage with the wider public and share. It’s important when we do that, because science benefits, the public benefits and it’s a win-win for both of us.”

This article originally appeared in the April 15, 2021 edition of Diverse. Read it here.