Academy Award winner Denzel Washington is continuing his legacy of philanthropy to Wiley College, a historically Black college in Marshall, Texas. This is the 15th year in a row that the actor has made a gift to the school, donating $100,000 to Wiley’s forensics program this month. 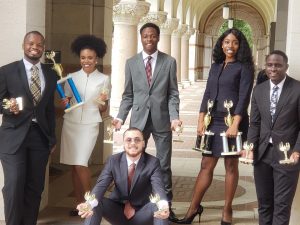 Members of the Wiley debate team

“Supporting the next generation of brilliant minds in the art of debate will open so many doors of opportunity for these students during college, career, and beyond,” said Washington.

This payment is the fourth portion of a $1 million pledge made in 2018. Washington made a previous ten-year donation of $1 million in 2007.

In 2007, Washington directed and starred in a film called The Great Debaters, which focused on the success of Professor Melvin B. Tolson. Tolson led Wiley’s debate team during the 1930s on a winning streak, opening the door to interracial collegiate debate.

Washington’s donations have allowed for the rebuilding of the legendary debate program at Wiley. In 2014 and 2016, the team won the Pi Kappa Delta national championships.