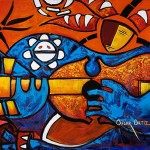 “Cuatro en Grande” by Oscar Ortiz is one of the featured paintings in the Colores exhibit at NCCU.

Acknowledging both the state’s rapidly changing demographics and the absence of a venue to recognize the artistic contributions of that community, Rodgers said, “It seems natural that we would reach out and pull the walls down.”

Rodgers said for several years, the museum has looked forward to presenting an exhibition devoted to the work of Hispanic artists who live in North Carolina and have worked in the state extensively.

“Few inclusive exhibitions of the work of Latino artists have been presented in North Carolina,” said Rodgers. “An objective here is to explore the work of some of the artists who have been overlooked and have not been shown in any great measure to Triangle audiences.” North Carolina’s Triangle area encompasses the cities of Raleigh, Durham and Chapel Hill.

He added, “Colores also recognizes how North Carolina’s and the Research Triangle community’s growing Hispanic population enriches our state and strengthens North Carolina’s cultural and economic ties to Latin America and beyond. We hope that the occasion of this exhibition will serve to increase public awareness and appreciation of the richness, variety and strength of the continuing evolving work of these talented artists.”

The exhibit, which runs through September 21 during Hispanic Heritage Month, is curated by Rafael A. Osuba, “someone who is familiar with the work of these artists,” said Rodgers. Osuba has presented exhibitions through Artists Studio Projects at venues across North Carolina.

The six artists featured in the Colores exhibit hail from Puerto Rico and several South American countries, including Argentina and Colombia and “represent a cross-section of expertise and craftsmanship,” said Rodgers.

“Some of these artists have been here for more than two decades and others for six or seven years and they have studied in some of the best schools in Latin America,” said Rodgers. “It is widely known that painters and sculptors of Hispanic heritage, and artists who have become citizens of Latin America countries, have made and continue to make significant contributions to world art. The names Goya, Velasquez, Picasso and Frida Kahlo immediately come to mind whenever Hispanic art is conjured. Their work has been shown in countless exhibitions throughout the world and capably celebrates the majesty of Hispanic culture.”

Rodgers adds, “A critical facet of this exhibition is engaging the perspective that audiences have about cultural expressions different from their own. Most significant is to ensure that audiences understand the concept that the qualities in art to which we universally react are those that encompass all people and contribute to communication between cultures.”

The closest the historically Black university came to presenting Hispanic-themed art was in 2001 when African-American-born sculptor Elizabeth Catlett, who became a Mexican citizen (and died this year), was shown at the NCCU Art Museum in 2001.

“She was inspired by African-American and Mexican people,” said Rodgers. “This exhibition builds on that show by presenting contemporary Latino artists similarly motivated by their unwavering desire to create visually eloquent expressions in a wide array of styles. These artists use artistic languages they believe will communicate most effectively a transnational visual narrative of individual identity based on multiple sources of inspiration.”

The artists on exhibit at the NCCU Art Museum include:

Chapel Hill-based painter Eduardo Lapetina, largely self-taught and who has developed a technique that involves pouring, splashing, dripping and scratching.

Gustavo De Los Rios, who uses the human figure as a point of departure to explore how bodies intertwine, forming complex relationships. His work was juried at Raleigh’s Artspace.

Jose Manuel Cruz, who said there are times when his art shifts at different levels. Some works are culturally implemented, while at other times the process of improvisation overwhelms with the intricacies of paint application.

Mint Hill artist Luis Ardila, who produces paintings that use symbolism as a key aspect of his iconography.

The work of Monroe-based artist Oscar Ortiz, who has graced calendars, greeting cards, CDs, magazines and posters. His most recent project was illustrating the children’s book The Poet Upstairs, by Judith Ortiz Cofer.