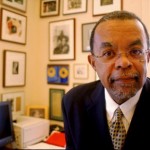 Henry Louis Gates Jr., the Harvard professor and cultural critic, has been so prolific as a writer that the idea of fitting his essential works into a single volume of a manageable size seems preposterous. It has been done, however, in the recently published The Henry Louis Gates, Jr. Reader.

The reader, edited by Harvard literature professor Abby Wolf, serves as a reminder of how accessible, informative and, yes, often funny Gates’ writing can be, particularly compared to other academics. (His description of Black hair care from his memoir, for example, is hilarious and culturally on-point. See “In the Kitchen,” page 19 in the book.)

Many other familiar pieces have found their way into the book, and Gates says he was most delighted that excerpts from Colored People: A Memoir (Knopf 1994), in particular a chapter about his mother and her death, “Walk the Last Mile,” have been resurrected for a new generation. The book is about growing up in a small town in the Eastern Panhandle of West Virginia in the 1950s and ’60s.

“I wrote Colored People so that my daughters, who are now 29 and 30, would have a record of this—I call it the sepia world—under segregation,” Gates says. “My mother died in ’87, and my daughters were too young to know her. I wanted them to know both my mother through the book and that world—the world that shaped me.”

Gates, who is the Alphonse Fletcher University Professor at Harvard as well as director of the W.E.B. Du Bois Institute for African and African American Research, is pleased that the reader includes some of his academic writings. He is also glad to see his profiles for The New Yorker take on a new life, including his favorite profile, a piercingly insightful and haunting piece about a longtime New York Times book critic. The writer, Anatole Broyard, a Black/Creole man, passed for White and went to his death without revealing his secret to his children.

The Gates reader opens with an article from The New Yorker, about the day Gates’ grandfather, Edward St. Lawrence Gates, was buried. That day, Henry Sr. introduced his sons to their grandfather’s voluminous scrapbooks, meticulously documenting family and local history. He also showed the boys the picture of their great-great-grandmother, Jane Gates, born into slavery in 1819.

It is no coincidence that these favorite stories of Gates’ revolve around love of family, present and past. It was that day and that picture that he says ignited one of his life’s central passions: genealogy—the search for roots—his and other people’s.

With the ink barely dry on the reader, Gates was working on the second season of the PBS series “Finding Your Roots with Henry Louis Gates Jr.”

“It’s an enormous pleasure for me doing these genealogy series,” Gates says. “If you think about it, I have been writing about race since I was in my 20s, and this is another way of writing about race. It’s a dramatic way, and it’s an exciting way, and we are able to use cutting-edge developments in both genealogy and in genetics.”

So what drives people to want to know their ancestry?

“I think about that every time I shoot another person [on PBS],” he says. “I think, ‘Why is this person so moved?’ For African-Americans, it is because this knowledge was systematically denied us, and so it’s left a hole, a nagging pain, and that we want that pain addressed, and the only way to address it is to find out.”

On camera, Gates seems to take great pleasure in building up to the dramatic “reveal” of each person’s lineage and in seeing their reactions.

“When I got the idea, the crazy idea, to do this series,” he says, “I thought that the most emotional part for Black people was when they found out about their African ancestry, but it’s not. People want to know that, but the response is much more cerebral. Without a doubt, the part that is most emotional is when I introduce someone to their African-American [ancestry] and particularly their slave ancestors. People cry.”

“If you look at the Corey Booker/John Lewis episode,” he continues, “Lewis just wept. Here is this great man, this warrior, who stood in the face of Bull Connor and submitted to being beaten, he just wept over and over again at the revelation.”

Gates would especially like for “everybody in the race” to do his or her family tree, because he believes that knowing one’s ancestry untaps powerful forces for healing the deep wounds of racism in America.

“One way for America to move on is to address the complexity of race, and the best way to do that is through genealogy and genetics,” he says. “And I think it will revolutionize our understanding of American history and also our concept of race when we realize there is no purity. From the beginning of human civilization, no matter what the conventions or the law was, and sometimes as a result of rape and sometimes as a result of choice, people had mixed offspring, and we are the product of those complicated sets of causes.”

Gates is certainly a product of that, as are many other African-Americans. After finding that the White man that family legend credited with fathering his great-grandmother’s children was not genetically linked to the Gates family, the professor recently resumed the search for the true ancestor. Jane had five children but never told them their father’s name, according to Gates.

Based on earlier tests, Gates has pinpointed DNA markers that trace his own lineage to a 4th Century Irish king with countless descendants. He is asking descendants of Irish families in Allegheny County, Md.—around Cumberland, where Jane Gates lived—for a DNA sample seeking a match to his genetic inheritance. Thirty people have responded, and DNA kits have been sent to them. Professor Gates also believes the study of genealogy and DNA could hold the key to reviving African-Americans’ passion for education.

“My whole theory is we can make African-American history much more dynamic, immediate and compelling to our kids, if we have our kids do their family trees,” he says.

Gates is collaborating with several colleagues at Harvard and elsewhere to design a science and social studies curriculum for middle and high schools that revolves around genealogy and DNA. The project is being developed under the auspices of the Genetics and Genealogy Working Group, which is sponsored by the Du Bois Institute that Gates heads. The working group will be seeking schools to pilot the project. (For more information, contact him at gates@harvard.edu.)

Still another arena in which Gates, who earned his master’s and Ph.D. in English literature from the University of Cambridge, has been active is in unearthing forgotten or unknown works, including Our Nig; or, Sketches From the Life of a Free Black in a Two-story White House, North by Harriet E. Wilson; The Bondwoman’s Narrative by Hannah Crafts; and The Schomburg Library of Nineteenth-Century Black Women Writers.

“I think there must be dozens and dozens of ‘lost books,’ probably hundreds, and even manuscripts that are in attics and basements and even buried in archives and libraries,” he says. “Not all the discoveries have been made, and I would encourage young people who are getting Ph.D.s to go back to the archives and do that dirty, dusty work and see what is still there that can be rediscovered and disseminated.”

Farah Jasmine Griffin, who is director of the Institute for Research in African-American Studies at Columbia University and, like Gates, teaches comparative literature and African-American studies, says the Harvard professor’s projects demonstrate that he is “an entrepreneur and he recognizes opportunities where other people don’t.”

“Although he is a scholar, he is not someone who is not accessible,” she says. “He is not talking in these kind of arcane languages and jargon-filled languages that people don’t understand. It’s a kind of rare combination of talent to have both the intellectual capacity to understand and write complex literary theory and, at the same time, be able to communicate to nonacademic audiences, which he has been able to do both through his popular writing and through his media work.”

The latter includes his role as a founder and editor-in-chief of the news website, The Root.com, as well as his writings in publications like The New Yorker and The New York Times.

Less effusive about Gates’ work is Herb Boyd, a journalist, prolific author and professor. He notes that he has been critical of Gates in the past, mainly for what Boyd deems omissions of Black Nationalists in Gates’ work and Gates’  characterizations of African complicity in the slave trade in a Times op-ed piece (“Ending the Slavery Blame-Game,” April 22, 2010).

“While much of his series on race on PBS was very well done, his venture again into the African realm was troubling,” says Boyd. “Once more, he seemed less than sympathetic when it came to the role of Africans in the slave trade.”