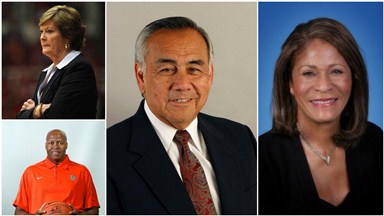 Many are familiar with the work of organizations such as Black Coaches and Administrators and the Knight Commission on Intercollegiate Athletics, which serve as policing organizations to monitor the NCAA’s commitment to diversity in hiring as well as athletic programs’ commitment to academics, respectively. But rarely is the time taken to salute the unsung heroes and heroines of college sports, who, day in and day out, busy themselves with opening the doors through which others metaphorically run, dribble, catch and score on their way to glory, fame and acclaim.

Often, these behind-the-scenes icons are not seeking applause and accolades. Any who stand witness to the positive changes, including unprecedented new opportunities on the diversity front, sincerely appreciate their invaluable contributions to collegiate athletics. Their stellar examples serve as inspiration for the tenacity and fortitude that will be needed in the battles that lie ahead.

Join us as we salute these impactful sports figures who have advocated for and led the charge toward diversity and who have left positive and indelible marks on the world of college sports.

Named as the University of Hawaii’s 22nd head football coach in 2011, Norm Chow is the first Asian-American head coach of a major college football program.

Chow has a long coaching resume, which includes 39 years of coaching experience collegiately and in the National Football League. Among his 36 years as a collegiate coach, he spent 27 years at Brigham Young, one year at North Carolina State, four years at USC, and three years at UCLA. Chow also spent three years as offensive coordinator for the NFL’s Tennessee Titans.

Prior to his arrival at the University of Hawaii, Chow was the offensive coordinator at Utah, where he led the Utes to a runner-up finish in the Pac-12 South Division in 2011 and a 30-27 victory over Georgia Tech in the Sun Bowl.

In his fourth season as the head coach of the Oregon State men’s basketball team, Craig Robinson led the Beavers to their best season in more than two decades; they won over 20 games for the first time since 1989-90 and posted a winning record for just the second time in school history during the 2011-2012 season.

Under Robinson’s watch, several Oregon State players earned Pac-12 All-Academic honors. Prior to joining Oregon State, Robinson spent two years as the head coach at Brown, leading a revival of the Bears program that he guided to a school-record 19 victories in his final season. Robinson won more games (30) in his first two years than any other head coach in Brown basketball history.

Prior to Brown, Robinson worked at Northwestern, where he spent six seasons with the Wildcats. He was an integral part of Northwestern’s dramatic turnaround, helping the Wildcats to the most wins in a four-year period in school history at the time, with 57 victories from the 2001-2002 to the 2004-2005 seasons.

For nearly four decades, the University of Tennessee Lady Volunteers basketball program has been among the nation’s elite, due in large part to Pat Summitt, the all-time winningest coach in NCAA basketball history.

She concluded her 38-year tenure on April 18 with a 1,098-208 overall record after raising the bar in the collegiate basketball world every time she stepped out on the court. In 2011, Summitt bravely revealed her battle with early onset dementia, “Alzheimer’s Type,” at the age of 59.

In the 2011-12 season, the Lady Vols finished the year with a 27-9 overall record and carried the banner as the 2012 SEC Tournament Champions with her 161 student-athletes. Summitt also held a 100 percent graduation rate for all Lady Vols who completed their eligibility at Tennessee.

C. Vivian Stringer holds one of the best records in the history of women’s basketball and holds the distinction of being the first coach in NCAA history to lead three different women’s programs to the NCAA Final Four: Rutgers in 2000 and 2007, the University of Iowa in 1993 and Cheyney State College (now Cheyney University of Pennsylvania) in 1982. She is the third winningest coach in women’s basketball history, behind only Tennessee’s Pat Summitt and former University of Texas coach Jody Conradt.

In 41 seasons, Stringer was the primary architect in transforming three programs into national title contenders, beginning with her appearance in the first-ever NCAA National Championship game. She has guided teams to 25 of the 31 NCAA Tournaments, including 10-straight (one of only nine schools to achieve the feat) dating back to the 2002-03 season.

A Driving Force in NASCAR