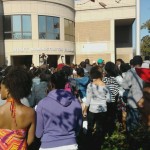 “Our graduation rate is only 32 percent; our retention rate is only 64 percent,” he said, quoting figures pulled from Collegestats.org, a site that aggregates data from the National Center for Education Statistics.

Those numbers, as well as dissatisfaction over the condition of dormitories and the school’s library, and the small range of course offerings, inspired a unique protest at the small school near Dayton, Ohio. Last October, 337 students—more than two-thirds of the student body—threatened to withdraw in fall 2013 unless conditions and services improved drastically.

The students walked from their student union to the main administration building. After receiving withdrawal forms, the students marched to Central State University, a public school adjacent to Wilberforce.

Harvey said Wilberforce president Patricia Hardaway never addressed the students. After the protest, Hardaway held a press conference at her residence. She told reporters the school planned to address the students’ complaints.

“There is not a university in the universe that relishes the idea of students withdrawing. Certainly we do not relish that idea either,” she said.

Hardaway did not respond to two requests for an interview for this story.

“How do you allow 20 students to walk the stage, then call them in May and say ‘Hey, you forgot a course,’” he said.

An official figure wasn’t available, but Harvey estimated about 140 students graduated in 2012. He blamed the confusion on poor recordkeeping and inadequate counseling.

“How is an English teacher the adviser for a mathematics student?” he said. “That’s kind of what we have now that’s going on.”

Students were also concerned about a lack of security on campus.

“Now we have officers walking on foot because we have several police cars and they’re not up to maintenance,” Harvey said. “If anything was to happen, the officers wouldn’t be able to respond right then and there. The officers are …  using a personal car to respond to university duties.”

Harvey remains pessimistic about a dialogue with Hardaway. He said he did not speak to her until January, and then she didn’t address the students’ concerns.

“She really wanted to know whether any faculty had handed me any documents, showing like payroll,” he said.

The demonstration was the latest blow to an institution that is struggling to make ends meet. According to its 2011 tax return, Wilberforce had a net worth of $5.5 million and is $29 million in debt. Depreciation has reduced the value of buildings and equipment by 40 percent to $17.7 million. The school no longer contributed to employees’ retirement fund.

In addition, Wilberforce is having a hard time attracting and retaining students.

The college had 689 students in fall 2010, according to records from the NCES. Current figures are unavailable, but Richard Deering, an associate professor and former union president at Wilberforce, claims fewer than 500 are now enrolled.

“I don’t know what the final figure will be, we’ll probably be 430 plus or minus,” he said, adding that the numbers were released during a faculty meeting.

The university’s troubles go back to 2003, when the school was in a fiscal morass. Floyd Flake, who was president at that time, made severe cuts to save money, including slashing academic programs. Faculty members also took a 10 percent cut in salary or retirement benefits.

Flake said his work justified his salary. “If I bring in $14 million and [cost] $210,000 a year, my salary seems worth it,” he reportedly told the Dayton Daily News shortly before resigning.

But faculty claimed Flake wasn’t running the school effectively, and gave him a no-confidence vote.

“The criticism … had to do with the fact that there were large increases in the salaries, and Floyd Flake was only on campus one day a week. He would fly up Monday morning, and then probably go back Tuesday morning. It was felt that that was a huge salary relative to the amount of time that he spent on campus,” said Deering, who headed the union during Flake’s tenure.

“He was able to bring in some money, but these were primarily grants for specific improvements,” Deering said. “It’s money in and money out, and it may not assist the university very much.”

Hardaway, who was provost, became president after Flake’s resignation. She cut spending and salaries, including her own. She now makes about $144,000 in salary and benefits, compared to $200,000 she made as provost.

But tensions between the faculty and administration didn’t grow warmer.  Hardaway got a no-confidence vote from the faculty union and the alumni. In 2011, the faculty and a group called Concerned Citizens of Greene County asked the Ohio Attorney General to investigate the president and board for fiscal malfeasance and neglect. But the office found no evidence of violations and closed the investigation.

Harvey says Wilberforce would have much to offer—once it gets its house in order. “We have to go out, spend the money, tear down the old dormitories that we have … and make it attractive for students to come.”