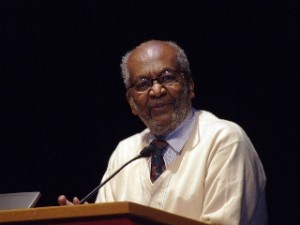 Dr. Edmund Gordon, who has long studied the achievement gap, suggests that standardized testing must be overhauled if the gap is to be closed.

Washington – Educational assessments should be revamped to help educators improve teaching and learning instead of being narrowly used—and in some cases misused—for purposes of accountability.

That is one of the key ideas that an independent commission proffered Monday as the commission released a new report on what its members envision as a radically transformed “assessment enterprise.”

“We certainly recognize and endorse the use of some type of assessment for accountability,” said Dr. Edmund Gordon, a psychology professor at Yale and Teachers College at Columbia University who serves as chairman of the Gordon Commission on the Future of Assessment in Education.

“But on our commission,” Gordon said of the commission that is named in his honor, “we most often talked about the possibility that another purpose may be superior, and this is informing and improving teaching and learning, both the processes by which we learn and teach and the outcomes.”

Gordon made his remarks at The George Washington University Monday for the public release of the commission’s technical and public policy reports.

The reports are accompanied by a series of papers that deal with a variety of subjects, from “changing targets” in educational assessments to “the challenges of diversity, equity and excellence.”

The commission is funded and gets administrative support from Educational Testing Service, but Gordon said the commission operates independently of ETS.

The recommendations outlined in the commission’s new reports drew mixed reviews from within the higher education community.

Some, such as Elena Silva, senior associate at the Carnegie Foundation for the Advancement of Teaching, praised the reports, saying they collectively bring more “scope and depth” to the national conversation about the usefulness of educational assessments.

But others suggested the reports lack the specificity needed to transform the way assessments are designed and used.

“This report is kind of a vision statement. It doesn’t get mired in details,” said Robert M. Hauser, a sociology professor at the University of Wisconsin – Madison and a member of the National Research Council and National Academy of Sciences.

“And it doesn’t provide a real map of exactly the areas where you carry out serious scientific design of assessment,” Hauser said. “It’s difficult to talk about going into the future of assessment without going into some of those details.”

The report comes at a time when all but five states have adopted the Common Core State Standards—a new set of standards meant to bring greater uniformity to what students throughout the nation are expected to learn at various grade levels.

The commission’s public policy report notes that, while the standards emphasize problem-solving, creativity and critical thinking over the “memorization of isolated facts and decontextualized skills,” the assessments meant to reinforce the standards will not be given until 2015.

States will be “deeply engaged” in implementing the new standards and preparing for the new assessments over the next few years, the commission notes in its report, which it says comes at a “propitious” time for a “fundamental reconceptualization of the purposes of educational assessments.”

Among other things, the Gordon Commission is calling on states to create a permanent Council on Educational Assessments modeled on the Education Commission of the States.

The envisaged council would evaluate the strengths and weaknesses of the assessment systems being developed by Smarter Balanced and Partnership for Assessment of Readiness for College and Careers—two consortia of states charged with developing assessments under the Common Core State Standards—as well as the effect of assessments on teaching and learning.

“There will be some who will argue that, with the work of the PARCC and Smarter Balanced state consortia to create new assessment systems not yet complete, it would be better to wait before pursuing major policy changes,” the public policy report states. “The Commission disagrees and believes that because that work is unfinished, now is the time to move toward more fundamental changes.”

The council envisaged by the commission would also create a study group to examine the “challenges of equitable assessment” in order to “explore issues related to diversity, equity and excellence.”

Hauser, of UW – Madison, questioned whether states needed to set up a new council as the commission recommends, or whether states could simply fold the recommended charges of the council into an existing entity.

“It worries me when there are too many cooks,” Hauser said.

Michael J. Feuer, Dean of the Graduate School of Education and Human Development at The George Washington University, praised the report for being potentially transformative, but urged caution in moving forth with changes in assessment.

“We all agree that part of this transformative vision is about innovating in the world of assessments, starting with design, implementing and reporting,” Feuer said. “The thing about innovation is it requires a certain kind of spirit of experimentation and willingness to try out new ideas, but (to also) be right there and vigilantly monitoring what the benefits are and what the consequences are.”

Many Texas Grads Not Ready For College, Panel Says