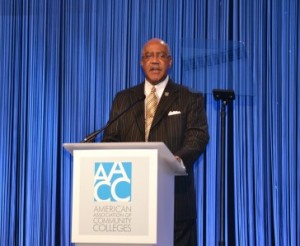 Dr. Walter Bumphus said he chose to dedicate his career to community colleges because he found his own background to be similar to that of the students he served.

SAN FRANCISCO — In excess of 2,000 community college leaders, teachers and partners descended on San Francisco over the weekend for the American Association of Community Colleges’ 93rd Annual Convention, which concludes tomorrow. Attendees had the benefit of attending hundreds of sessions touching virtually every corner of the community college experience.

Yesterday, AACC attendees packed an oversold luncheon in the Moscone Convention Center for the 2013 Hail and Farewell Luncheon and AACC Business Meeting. The proceedings got underway with a recognition of retiring community college CEOs, CEOs who have served for at least 25 years, and new college CEOs.

In continuing with the theme of celebrating and recognizing exemplary service, Dr. John Roueche presented Dr. Walter Bumphus with the 2013 Diverse Champions Award, which recognizes higher education leaders who have shown unwavering commitment to equal opportunity and access for all. Bumphus is currently the president and CEO of AACC, yet David Pluviose, executive editor of Diverse: Issues In Higher Education, declared that Bumphus “has served in virtually every community college leadership position with distinction.”

Roueche, president of the Roueche Graduate Center at National American University and the former director of the University of Texas at Austin’s Community College Leadership Program, was the inaugural recipient of the Diverse Champions Award in 2012 and introduced Bumphus as a “champion for the underserved (and) the at-risk.” Roueche added, “You champion diversity. … You champion equality and opportunity.”

Roueche called Bumphus “my dear brother” and noted that he is “truly a leader among leaders.”

In response to the award, Bumphus said, “I’m obviously very humbled but I only wish that my mother could be here today because if there was ever a diversity champion, it was her.” He acknowledges his mother’s guidance and strength as crucial to him getting through the tumultuous time of integration during his own education journey. He also gave a few words of credit to those who came before him, on whose shoulders he stands, but are often not formally recognized.

In a powerful morning session, Bumphus joined members of the AACC’s 21st-Century Initiative Implementation Steering Committee in explaining the vision the AACC has for community colleges and the roadmap laid out in the 21st Century Commission Report, which details recommendations to strengthen community colleges throughout the nation.

Bumphus began the session saying, “We’re doing some of the most important work, at least in my opinion, that needs to be done for community colleges.” Steering Committee members proceeded to answer a series of questions prompted by Kay McClenney, program director and lecturer at the Department of Educational Administration at the University of Texas at Austin. Each member emphasized the importance of college completion, particularly at the community college level, and noted that this emphasis is a shift from the previous focus on access.

When McClenney asked committee members if community colleges are ready for this shift in focus and policy, E. Ann McGee, president of Seminole State College in Florida, said, “It’s going to take a lot of courage to make this happen, but I believe the time is right.”

“Our focus is to really reclaim America’s competitive edge internationally,” declared Alex Johnson, president of the Community College of Allegheny County. He continued to emphasize that everyone in each institution’s community has a responsibility to work toward the same goal and push for every student’s success.