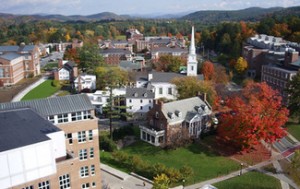 CONCORD, N.H. — Dartmouth College is canceling classes for a day after students who staged a recent protest decrying homophobia, sexual assault and racism on campus were targeted by online threats.

Hundreds of high school seniors deciding whether to attend the Ivy League college in Hanover were watching a student performance Friday night when about 15 students burst in chanting “Dartmouth has a problem!” That led to online threats being made against the protesters and their perceived supporters.

College administrators sent a campus-wide message Tuesday night announcing that Wednesday’s classes would be replaced by programs focused on the college’s commitment to fostering respectful debate.

“We feel it is necessary for the community as a whole to have the opportunity to learn about all that has transpired and to discuss further action that will help us live up to our mission,” wrote interim President Carol Folt and other administrators. “The decision to replace classes for a day with alternative programming is not taken lightly.”

College spokesman Justin Anderson said threats of bodily harm were made against protesters and others who had nothing to do with the protest, some of whom were targeted because of sexual orientation or race. He described the comments, most made on an online forum frequented by students, as including “some really awful stuff, to the point that these students were concerned for their safety.”

“Threats of the nature we were seeing online are never something we can abide,” he said. “Because of the nature of these threats, we think what we’re doing tomorrow is crucially important.”

Wednesday’s schedule includes a speech by a social justice and diversity consultant, an outdoor community gathering, and small group discussions led by faculty and staff members across campus.

While canceling classes is unusual, it is not unprecedented, Anderson said. Some classes were canceled during protests against apartheid in the 1980s, he said.