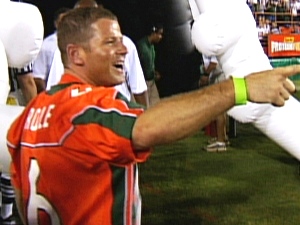 INDIANAPOLIS — The NCAA opened a key hearing in the massive infractions case against the University of Miami on Thursday, with school officials, former coaches and the conference commissioner all on hand to defend the Hurricanes against allegations that could bring severe sanctions in the improper benefits case involving former booster Nevin Shapiro.

University President Donna Shalala and Atlantic Coast Conference Commissioner John Swofford were at the hearing at a hotel in downtown Indianapolis, and they were joined by athletic director Blake James, football coach Al Golden, former assistant coach Clint Hurtt and former basketball coach Frank Haith. Hurtt is now at Louisville and Haith is at Missouri.

All the officials declined comment before the proceedings began and at the first lunch break. The hearing is expected to stretch into at least today and possibly Saturday.

Shapiro’s claims of providing impermissible benefits to Miami athletes, recruits and coaches for nearly a decade are the root of the scandal, but the NCAA has been rocked by allegations that its investigators intimidated witnesses and that they improperly collected information using the subpoena powers of Shapiro’s own attorney in a separate bankruptcy case.

NCAA President Mark Emmert was forced to admit his enforcement staff had botched the investigation, leading to requests by the school so far denied to have the case tossed out. Those arguments were expected to be the focus of this week’s hearing.

The investigation may go down as one of the most complex in NCAA history, even without the organization’s mistakes.

The principal whistleblower is Shapiro, a former booster who’s serving a 20-year sentence in federal prison for masterminding a $930 million Ponzi scheme. Virtually all of the individuals who were named by Shapiro in claims published by Yahoo Sports in August 2011 are no longer at the university, and several people the NCAA wants to talk to have refused to cooperate.

Shapiro’s tales are wild and sordid. Among other things, he says he gave dozens of coaches, players and recruits things like cash, memorabilia, strip-club outings, yacht rides and even paid for prostitutes.

The NCAA said the benefits went to 72 then-players, three recruits and 12 “friends and family members.” Most of Shapiro’s claims involved the football program, though others also involved the Hurricanes’ men’s basketball team.

Some of the sanctions have already gone into effect, since they were self-imposed. Miami’s football team has missed three postseason games, two bowl games and what would have been an appearance in last season’s Atlantic Coast Conference championship game in response to the investigation. Golden is also holding back a number of scholarships from the 2013 roster.

Shalala has called the NCAA probe “unethical and unprofessional” and attempted to have it dismissed. Former NCAA enforcement chief Julie Roe Lach was forced out in March after a report showed the NCAA paid Shapiro attorney Maria Elena Perez more than $19,000 to collect evidence in the case, despite objections from the NCAA’s legal department and against NCAA rules.

The NCAA does not have subpoena power and has said it tossed out some details from the notice of allegations against the Hurricanes. Miami does not believe the NCAA has stricken enough, and it has accused the NCAA of using “impermissible and unethical” tactics in interviews with Haith and former assistant basketball coach Jake Morton.

Haith is charged with a failure-to-monitor violation. Hurtt has been alleged to have received and distributed impermissible benefits and with providing false and misleading information during the Miami investigation.