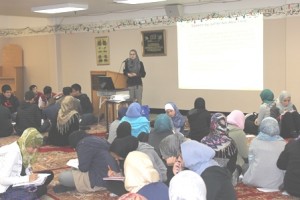 Ameena Qazi, a staff attorney in Los Angeles for the Council on American–Islamic Relations, says Muslim parents are urging their children not to get involved in campus activities.

In light of recent news on the federal government spying on Americans via phone records and electronic correspondence and the lawsuit filed by the American Civil Liberties Union and the New York Civil Liberties Union in response, the question of students’ rights and academic freedoms on campus has risen once more.

“Recent revelations at the national level about government reviewing phone information and Internet information are going to be especially troubling on college campuses where academic freedom, freedom of intellectual exchange is so important to the robust functioning of an academic environment. So any time there is evidence of government spying, that’s going to have a chilling effect on free discourse and innovation,” said Dr. Alex Vitale, a sociology professor at the City University of New York’s Brooklyn College, who drafted a resolution last fall in response to reports that the New York Police Department had paid informants that infiltrated Muslim student groups at several CUNY campuses in the last few years.

Indeed, after The Associated Press made public that the NYPD set up spies at area schools, Vitale says many Muslim students became reticent to participate in events and join organizations for fear of being the subject of surveillance. It has even had an effect on faculty, according to Vitale.

“I think that evidence of that could be seen recently at Brooklyn College, where one academic department agreed to cosponsor an event discussing the issue of sanctions against Israel, and it requested other departments to sign on also as cosponsors, and the other departments refused, I think, in part, because of this climate of anti-Islamic sentiment and the sense that people are watching what goes on,” he said.

For Moustafa Bayoumi, a Muslim English professor at Brooklyn College, however, the unveiling of the spy ring was more of a confirmation than a revelation. “There was a suspicion that that kind of stuff was going on for a very long time anyways,” he said.

Last week, the ACLU, the NYCLU and the Creating Law Enforcement Accountability & Responsibility project at CUNY School of Law even filed a lawsuit against the NYPD on behalf of Muslim community leaders and a charitable organization for its surveillance activities. It’s the third major legal action taken against New York City law enforcement since The Associated Press broke news of the spy program in 2011. It wasn’t just several CUNY schools that were monitored, according to the AP, but other colleges in the Northeast, including Yale Unversity, Rutgers, Columbia, Syracuse and the University of Pennsylvania, were also under law enforcement’s watchful eye.

While Vitale organized the resolution at Brooklyn College in response to these reports, and the school’s president issued a strong statement against such reconnaissance tactics, Bayoumi said going forward, college administrations need to issue even stronger words to the public and law enforcement agencies.

“I wanted to hear more from the chancellors because there is a lot more political clout, and we didn’t hear anything from the chancellors,” he said, noting that the private institutions had a better response in his opinion. “I think that that was exactly what we needed from the CUNY administrative ranks. We’re part of the governmental apparatus. It just shows that money [private universities] produces more autonomy.”

Meanwhile, news of government surveillance programs on campuses has spread across the country.

“Definitely the events that unfolded on the East Coast reverberated here and it made everyone really wonder and question whether or not similar programs exist here at the federal or local law enforcement level,” said Ameena Qazi, a staff attorney in Los Angeles for the Council on American–Islamic Relations. In the case involving 11 University of California, Irvine students who received two misdemeanor counts from a California jury for speaking out in opposition of Israeli ambassador Michael Oren in February 2010 brought about the question, where did the District Attorney’s office get the students’ e-mail from, said Qazi. “There is a feeling that the more active you are, the more you will be watched,” she said.

Muslim parents are urging their children not to get involved on campus, said Qazi, who works with CAIR on community events that bring together college students from many different universities.

“It’s a growing concern for all Americans,” she said.