Study Says Affirmative Action Does Not Do a Disservice to Students 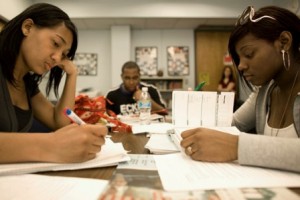 A new study refutes the idea that affirmative action does more harm than good for students.

A new study indicates that weaker students who are admitted to elite colleges and universities typically do as well as their better-prepared contemporaries, dispelling a widespread belief that affirmative action tends to do more harm than good.

That’s the findings included in a forthcoming article, scheduled to be published in Sociology of Education in the next few weeks. It comes amid the U.S. Supreme Court’s recent decision to send a case involving affirmative action back to the lower courts, ultimately making it harder for universities to use race as a factor in admissions.

The 7-1 decision in the case brought by plaintiff Abigail Fisher—a White student who was denied admission to the University of Texas—said that the lower court had to examine whether the university correctly used affirmative action to achieve diversity or whether it could use race-neutral criteria such as family income instead.

“The attainment of a diverse student body serves values beyond race alone, including enhanced classroom dialogue and the lessening of racial isolation and stereotypes,” U.S. Associate Justice Anthony Kennedy wrote in the majority opinion.

For years, opponents of affirmative action have argued that minority students admitted to highly selective schools tend to fall by the wayside and drop out at alarming rates.

But Dr. Eric Grodsky, a professor at the University of Wisconsin-Madison, and Dr. Michal Kurlaender of the University of California say that’s not true. Their research indicates that mismatched students of all racial backgrounds tend to do exceedingly well even though their grades and test scores are much lower than their counterparts.

To reach this conclusion, they tracked students enrolled in the UC system for four years, comparing their grades, credits and likelihood of dropping out to two groups: their better-prepared peers at elite UC campuses and students like them who chose to attend less competitive UC campuses.

The mismatched students in the study initially had been denied admission to UC Berkeley, UCLA and UC San Diego due to budgetary cutbacks but were eventually admitted. The researchers found that, although the students were at a disadvantage relative to their better-prepared peers, that disadvantage did not necessarily affect their performance in the classroom.

“These students were clearly at the bottom of the admit pool,” says Grodsky. “They had substantially lower grades and test scores than regular admits and, since they were not initially admitted, probably did not have other things about them that admissions officers saw to counterbalance their academic deficits.”

“Some people have suggested that comparing students of similar level of academic preparation misses the point of mismatch,” says Grodsky in an interview with Diverse. “But that’s not right. Hardly anyone is average. Most students are above or below the mean level of academic readiness for their class. Mismatch says that, once you get far enough away from the mean, you experience problems that are greater than would be predicted based on your academic preparation. In the data we have, we just don’t find that to be the case.”

The ongoing debate around affirmative action does not affect California’s public universities since they do not consider race or ethnicity in admitting students. In 1996, voters approved Proposition 209, strictly forbidding universities from using race, sex, ethnicity or national origin in the admissions process.

But since then, the number of minority students admitted to the 10-campus UC system has dropped, according to admission representatives. At UC Berkeley, for example, African-American students made up 7.3 percent of enrollment in 1995. In 2011, they made up 3.9 percent.

Admission to the state’s less competitive California State University system is based on a student’s grade-point average and test scores only. Applicants don’t write essays, as they do for the UCs. Students who graduate in the top third of their class are automatically admitted to a CSU campus.

Kurlaender and Grodsky say that, despite Proposition 209, their findings refute the notion that affirmative action does a disservice to students.

“The plaintiffs in the Fisher case claim that the beneficiaries of affirmative action are actually among the victims because of mismatch,” says Kurlaender. “Our study shows just the opposite; mismatched students are more likely to persist in college at elite UCs and do not pay a penalty in terms of grades for doing so.”

Ala. Governor Calls Special Meeting of ASU Board

Experts: Education Not Likely to be Priority at Democratic National Convention