Woodruff Mural Collection Chronicling the Past, Providing Hope for Future 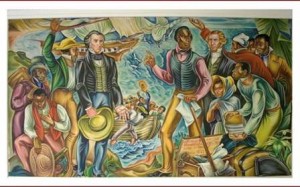 After undergoing a year-long restoration by the High Museum of Art in 2011, the Woodruff murals — Back to Africa, pictured above, among them — already have been shown in Atlanta and Chicago.

A rare collection of murals on African-American history will be on display starting this Saturday, running through October 13, at New York University’s NYU 80WSE Galleries. “Rising Up: Hale Woodruff’s Murals at Talladega College” will feature six large pieces from the late Woodruff, a Black printmaker, draftsman, painter and NYU professor.

“I think they are really important because they speak to the African-American experience in the United States, in the South; and Hale Woodruff is an amazing historian, so to speak, who humanized some of the realities of the past, of the history of the Black experience in this country,” said Eddie Mandhry, associate director of the Africa House at NYU, at the exhibition’s opening reception July 9. “Having these murals travel all the way from Talladega College is an exceptional opportunity to be able to have an audience with a piece of history. Hale Woodruff was at NYU, and this is a sort of homecoming.”

After undergoing a year-long restoration by the High Museum of Art in 2011, the works of art, which include colorful, cubist-influenced depictions of scenes like The Mutiny on the Amistad, The Trial of the Amistad Captives, The Repatriation of the Freed Captives, The Underground Railroad, The Building of Savery Library, and Opening Day at Talladega College, have been shown in Atlanta and Chicago.

“Woodruff was a founding member of ‘Spiral,’ an African-American arts and civil rights movement established in this very city. He and several other prominent Black artists during the 1960s, in downtown Manhattan, sought to explore the role that art plays in the context of culture, race, politics and society,” he said. “His pieces tell the stories of racial struggle from protests against slavery, to Black Americans’ resilience and advancement since the end of the Civil War.”

Scores of arts aficionados, academics, community leaders, students and administrators turned out for the reception celebration last week in honor of the exhibition.

“Seeing art of this magnitude, particularly what it represents in terms of our struggles with freedom and that we are free now and that we are able to use our gifts, is a testament to what HBCUs offer,” said Ashlei Stevens, development associate at the UNCF, adding that, in light of financial troubles at universities and the recent closing of St. Paul’s this summer, “This is important because it does put the focus back on historically Black colleges and what they were created to do.”

Indeed, the tour these murals are taking is helping raise the profile of the small liberal arts college they call home.

About 80,000 visitors soaked in the works in Atlanta and another 30,000 in Chicago, said Dr. Tysus Jackson, vice president of Talladega College. “It’s really been a phenomenal opportunity for Talladega. This has really started to bring Talladega to the rest of the world,” said Jackson. “Part of the vision that our president, Billy Hawkins, has for the project is not just to share the work through the traveling exhibition, but also to be able to build a new building when the murals return home to house the work and the arts program.”

The school is hoping to raise $10 million during the tour in order to make a new arts building a reality. The school is still looking to find a lead donor for the project.

“The tour has been an endearing journey that puts us on a global stage where we can also showcase the Talladega College experience. We are grateful for the support of New York University in embracing the work of a past colleague and pioneering artist,” stated Dr. Billy C. Hawkins, president of Talladega College.

The New Face of the NAACP