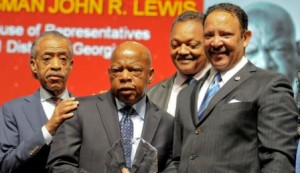 PHILADELPHIA—Fifty years after the historic 1963 March on Washington, civil rights leaders converged on the City of Brotherly Love for the National Urban League Conference last week to push for education reform, the creation of more jobs and to safeguard voting rights.

They also sought to drum up public support for the upcoming commemorative March on Washington, scheduled to take place in Washington, D.C., on August 24, 2013.

“They would say, ‘That’s the way it is. Don’t get in trouble.’ But one day, I was inspired to get in the way and get in trouble,” said Rep. John Lewis, who spoke at the 1963 March on Washington where Dr. Martin Luther King Jr. delivered his famous “I Have a Dream Speech.”

Lewis, who was beaten in Selma in 1965 by Alabama State troopers as he tried to cross the Edmund Pettus Bridge, received the National Urban League’s Civil Rights Champion Award.

“For more than 50 years I have been getting into what I call good trouble, necessary trouble,” Lewis said.

This year’s Urban League Conference came amid the recent jury acquittal of George Zimmerman on all criminal accounts in the slaying of 17-year-old Trayvon Martin. The conference speakers included Martin’s mother, Sybrina Fulton, and her lawyer Benjamin Crump, who urged the audience of thousands to actively protest “Stand Your Ground” laws.

“If Trayvon would have been of legal age, and Trayvon would have had a permit to carry a gun and he would have defended himself against this strange man who followed him, would the ‘Stand Your Ground’ laws have vindicated Trayvon Martin?” Crump asked. “I know I’m preaching to the choir this morning, but this conversation has to get to the George Zimmermans of the world that our children are not criminals. Our children are not thugs. Our children have the right to walk from the 7-Eleven.”

Fulton said that she supports an investigation into whether her son’s killer could be charged under federal civil rights laws.

“No college for Trayvon. No grandkids coming from Trayvon; all because of a law, a law that has prevented the person who shot and killed my son to be held accountable and to pay for this awful crime,” Fulton told a packed auditorium. “My message to you is please use my story, please use my tragedy, please use my broken heart to say to yourself, ‘We cannot let this happen to anybody else’s child.’’’

The Reverend Al Sharpton, who is spearheading next month’s commemorative March, said that, despite the country’s first Black president and first Black attorney general, African-Americans continue to face mounting challenges.

“Black unemployment has not decreased,” said Sharpton, who is president of National Action Network. “We must demand a Jobs Act.”

Founded in 1910, the National Urban League is one of the nation’s oldest civil rights organizations. Marc H. Morial—the former mayor of New Orleans—currently leads the group.

“In previous years, the conference was more focused on professional networking and exchanging business cards,” said Thelma Marshall, who was among the thousands who attended this year. “I’m happy to see that, this year, we are talking about rolling up our sleeves and fighting to improve access to higher education, fighting racial profiling and pushing back on efforts to disenfranchise the vote.”

The panelists praised Attorney General Eric Holder’s decision to seek court approval to subject Texas to the same type of federal oversight that existed between the passage of the landmark voter-protection law in 1965 and the Supreme Court’s decision on June 25.

In a 5-4 vote, the court threw out the most powerful part of the act—the section that determined which states had a history of voting-rights violations and therefore required Justice Department “preclearance” for changes in voting laws.

Holder, who attended the Urban League Conference, called the decision flawed. But, he said, it was not a defeat, but “a historic opportunity” to strengthen civil rights laws across the country.

For more information on the March on Washington, visit www.nationalactionnetwork.net.