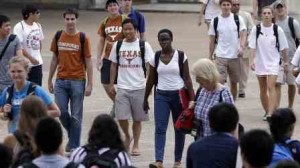 Institutions will still use race as an admissions factor.

SAN FRANCISCO — Though campuses nationwide will likely face more scrutiny over their admissions policies in the aftermath of Fisher v. University of Texas at Austin, a former Clinton administration official turned UT professor predicts that using race as a factor will continue as part of UT’s affirmative action efforts.

“Race-neutral policies fail in Texas,” said Norma Cantú, a UT professor of educational administration. “There are still racially segregated and isolated high schools in the state, even in 2013. We shouldn’t have them anymore, but we do.”

Cantú’s comments came during a session of the six-day, American Bar Association (ABA) annual meeting, which drew 8,000 attendees and wrapped up Tuesday.

Cantú, who holds a joint faculty appointment in UT’s law school, also cited statistics resulting from the university’s race-blind “Top Ten Percent” admissions policy, which, for at least a decade, has guaranteed undergraduate admission to any student who graduates within the top 10 percent of his or her Texas high school. In 2012, about half of all qualifying Whites in the state and one-fourth of all qualifying Asians applied to UT under the “Top Ten Percent” offer.

But only one of every 17 qualifying Blacks sought admission under the plan, a figure that was identical among qualifying Hispanic students, as well, Cantú said, adding, “We just don’t get enough Blacks and Hispanics.”

Under President Clinton, Cantú served eight years as assistant secretary of education for civil rights. In recent weeks, UT officials have been considering how to proceed in response to the U.S. Supreme Court’s decision to send back to the lower courts for additional review the lawsuit filed by Abigail Fisher, a White student who was denied admission to UT. The high court said the Fifth U.S. Circuit Court of Appeals did not apply “strict scrutiny” of the race-conscious Texas admissions policy.

The session, at which Cantú spoke, titled “Opportunity or Blockage? Fisher v. University of Texas and the Educational Pipeline to the Legal Profession,” featured law professors from throughout the country. Although the academic discipline of the panelists suggested their discussion might center on law school admissions alone, some of their remarks crossed over into the process for undergraduates and hinted at what the short-term future might hold.

Cantú described the process of devising admissions standards among academically selective universities like UT “more art than science” because so much of that state’s history ought to be taken into consideration.

“Some high school counselors feel entitled to overrepresentation of their students at UT,” she said. “This is also a state where people used to have the word ‘colored’ in their vocabulary, and at least one school used to have ‘White women’ in its name.”

Although Cantú said the Supreme Court’s decision in the Fisher case has little, if any, effect on her school’s admissions practices, some panelists at the session indicated they felt differently about their campuses.

Carla Pratt, a professor and associate dean for academic affairs at Penn State’s law school, said the Fisher case “changes the game” and described herself as “a pessimist.” She did not believe her campus, which enrolls 38,000-plus undergraduates, could significantly improve its racial diversity anytime soon without race-conscious admissions.

“We don’t try race-neutral policies because we have no critical mass of minorities,” Pratt said. “We have a difficult time in central Pennsylvania.”

“It’s interesting that the schools bear the burden of proof and must show that race-neutral alternatives were insufficient,” Pratt said, adding that the number of Hispanics, for instance, is low among central Pennsylvania’s general population.

She voiced no outright opposition to considering color-blind qualifications in place of race, such as a family’s socioeconomic status, whether English is spoken as a second-language — or not at all — at a student’s home or whether a student is a first-generation college-goer. However, “there are lots of White kids in the latter category,” she said. “And I’m not confident these proxies will produce a critical mass of minorities either.”

University of Nevada, Las Vegas law professor Ruben J. Garcia noted that “lots of people were wondering whether critical mass goals would be done away with” in response to the Supreme Court’s decision in the Fisher case. Garcia found relief in the court’s decision “because it didn’t make anything worse.”

“You don’t want the pants too tight nor the collar too big,” she said. “We are using race as an admissions factor only where we need to. This is up to each university, and it’s a temporary means until you reach your goal. It’s not a new standard but an old standard with a new flashlight scrutinizing it.”

Cantú said constituents on her campus believe a critical mass of minorities doesn’t entail quotas but rather having enough students, for example, to avoid “having one Asian student in a class of 150 who ends up feeling he or she is speaking for all Asians every time he or she offers an opinion.”

Pratt encouraged admissions officers to make sure their practices support and advance the institutional mission statement, which can also become a way of defending diversity efforts in general.

Cantú reminded college officials to come to an understanding and agreement over what types of students they are trying to enroll by using affirmative action. “Be able to answer the question, what’s your justification for using race?”