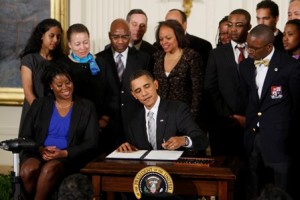 The Obama administration is making changes to Parent PLUS Loan regulations.

In response to outcries from congressional leaders, organizations, parents and students, the U.S. Department of Education plans to make changes to the PLUS loan programs to address the growing crisis in higher education that has blocked as many as 400,000 students nationwide from enrolling in college, according to figures from the United Negro College Fund.

Since the fall of 2012, parent loans have been getting denied after unexpected changes to credit requirements, stemming a major ripple effect. Historically Black Colleges and Universities (HBCUs) were disproportionately impacted by the change in guidelines for credit worthiness, causing 28,000 students attending HBCUs to be denied loans. As a result, HBCUs collectively lost more than $150 million.

Dr. William Harvey, president of Hampton University and chair of President Obama’s HBCU Board of Advisors, said that HBCUs were  in “the worst situation I’ve seen in 35 years” at the annual conference in April of the National Association for Equal Opportunity (NAFEO).

Under pressure from groups such as the Congressional Black Caucus, NAFEO, UNCF, the Thurgood Marshall College Fund (TMCF), and frustrated parents and students, the U.S. Department of Education now says families that have recent but small-scale debt may now become eligible for PLUS loans through appeals.

Under the newly announced change, parents whose loan applications are denied may ask for reconsideration under the new policy. The Education Department said students whose parents are denied PLUS loans automatically become eligible for an extra $4,000 in loans that are more flexible and carry lower interest rates.

In June, the Education Department announced it would begin sending regular reports to affected parents and schools showing how applicants could have their credit check reconsidered. The letter addressed to Fudge says they also will send weekly reports to school presidents so they can monitor the results of loan reconsiderations.

In fall 2011, the Education Department changed its interpretation of the definition of “adverse credit history” and began considering delinquencies older than 90 days in determining creditworthiness for the Parent PLUS loan program. Organizations like UNCF, NAFEO and TMCF challenged the lack of advanced notice, the absence of an impact analysis, or requests for stakeholder input before making the changes. Under the change, parents with “charge offs” and accounts in collections within the past five years could not receive loans, impacting 10 percent of the 2012-2013 enrollment at HBCUs.

The CBC, along with other groups, had been pressuring the Obama administration and the Department of Education to suspend the new policy, which was damaging educational opportunities for students and causing a hemorrhaging of HBCUs for a second year in a row.

In a statement from Congressional Black Caucus Chairwoman Marcia L. Fudge dated Aug. 1, she wrote, “The CBC demands that the Department of Education immediately suspend use of the new ‘adverse credit’ criteria as a determinant for Federal Parent PLUS Loan eligibility. Thousands of students, particularly those who attended Historically Black Colleges and Universities (HBCUs), have had to abruptly leave school with no clear path to returning. Student enrollment at HBCUs has dropped, which has resulted in a loss of nearly $150 million for the HBCU community. Actions taken by the Department of Education have disproportionally and adversely impacted students across the nation; in particular, more than 128,000 HBCU students. It is time to stop the bleeding.”

The White House also received a letter a few weeks ago signed by 11 former HBCU presidents and the National Association for Equal Opportunity requesting a meeting, as well as requests from the UNCF and the Thurgood Marshall College Fund to come up with a long-term solution to fix the Parent PLUS loan problem.

The letter was signed by former presidents of Clark Atlanta, Alcorn State, Bowie State, North Carolina A&T, Southern, Coppin State, Howard, Tuskegee, Kentucky State, Morgan State and Delaware State universities, challenging the “harmful effects this policy change has had on access to college nationally, its disproportionate impact on the HBCU community over the past year and its devastating impact on student enrollment in the coming year, and beyond.”

The victory to loosen PLUS loan requirements may stave off other planned activity to get the attention of the White House. Those activities include planned protests by busloads of Black students from around the country, including those from Cheyney and Lincoln universities to coincide with the 50th anniversary of the March on Washington later this month, and petition drives on various websites to demonstrate the significant impact on students and families.

NAFEO, UNCF and TMCF have been working on a set of recommendations to send to Congress to improve financial aid, including the Parent PLUS loan and Pell Grants.  The higher education organizations are also requesting a guidance document from U.S. Secretary of Education Arne Duncan.

Besides outrage about loan denials, there is also growing concern about the future of HBCUs overall and the need for a permanent executive director for the White House Initiative on Historically Black Colleges and Universities considering the unique challenges currently being faced by HBCUs and Minority Serving Institutions (MSIs), including funding losses and closures.

Since Dr. John S. Wilson left the position of executive director to become president of Morehouse College six months ago, the U.S. Department of Education has named two interim executive directors to run the agency that represents HBCUs within the federal government.

“The appointment of yet another interim executive director does not bode well for the HBCU community, whose challenges are many, immediate, and likely to have lasting adverse impacts,” according to a letter sent to President Obama from NAFEO.

In addition to dealing with news about higher education challenges, particularly those impacting underrepresented students, the Obama administration has also been hit with the news that U.S. Undersecretary of Education Martha Kanter is stepping down from her post.

Kanter has served since 2009 when she was confirmed as undersecretary of education and has overseen higher education policies such as student aid and adult education.

In her first two years as undersecretary, the successful implementation of the Direct Student Loan program resulted in a 50-percent increase in college enrollment, growing from 6 million to 9 million students today who are Pell Grant recipients.

Kanter and her team have worked with postsecondary partners from across the nation to boost American innovation and competitiveness with an ambitious college completion agenda, teacher quality reforms, adult education program improvements, modernization of career-technical education and a new partnership with the U.S. Department of Labor, which has announced the first $500 million of a $2 billion federal investment to increase graduation and employment opportunities for community college students.

Kanter previously served as chancellor of California’s Foothill-De Anza Community College District. She reportedly is leaving to return to academia.

Her departure comes at a time when the Administration faces significant higher education work including the pending renewal of the Higher Education Act and implementing President Obama’s goals to constrain college prices and for the U.S. to have “the best educated, most competitive workforce in the world by 2020” as measured by the proportion of college graduates over the next decade.