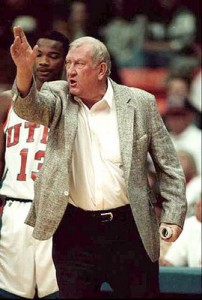 Don Haskins, coached at Texas Western — which became UTEP — for 38 seasons, winning 719 games and leading the Miners to 14 NCAA appearances.

NEW YORK — Naismith Hall of Famer Don Haskins, who led Texas Western to one of the most memorable NCAA championships, women’s basketball pioneer Theresa Grentz and former Iowa and USC coach George Raveling have been selected as the 2013 recipients of the Lapchick Character Award.

The winners of the sixth annual awards were announced Monday. The award is named after the Hall of Fame coach and is presented by a group that includes Joe Lapchick biographer and former player Gus Alfieri. It recognizes those who have shown the character traits of Lapchick, who coached at St. John’s and with the New York Knicks.

The awards will be presented at a luncheon on Nov. 21 with the recipients honored that night during the 2K Sports Classic, benefiting the Wounded Warrior Project at Madison Square Garden.

Haskins, known as “The Bear,” coached at Texas Western, which became UTEP for 38 seasons, winning 719 games and leading the Miners to 14 NCAA appearances. None was bigger than the 1966 run that culminated with the 72-65 championship game victory over Kentucky and coach Adolph Rupp. Haskins started five Black players that day, a barrier-breaking event recalled in the book and movie “Glory Road.”

Haskins’ last UTEP team finished 16-12 in 1998-99, his 32nd winning season in 38 years. He was inducted into the Naismith Memorial Basketball Hall of Fame in 1997. Haskins played for Hall of Fame coach Henry Iba at Oklahoma State when the school was still Oklahoma A&M and was his assistant coach for the 1972 U.S. Olympic team. Haskins died in 2008 at age 78.

Grentz played for Naismith Hall of Fame coach Cathy Rush at Immaculata College, winning three AIAW national championships from 1972-74. She began her 33-year coaching career immediately after graduation, starting at Saint Joseph’s in her native Philadelphia. She went on to Rutgers, becoming women’s college basketball’s first full-time head coach. After 19 seasons at Rutgers, which she led to the AIAW national championship in 1982, Grentz coached 12 seasons at Illinois, finishing with 671 victories.

She was selected as the head coach for the U.S. women’s Olympic team in 1992, winning the bronze medal at Barcelona. In 2007, she was presented the Eckman Award by the Women’s Basketball Coaches Association, an organization for which she served as president for two years.

Raveling was a star player at Villanova before getting into coaching as an assistant to Lefty Driesell at Maryland. He was head coach at Washington State, Iowa and Southern California from 1972-1994, amassing 337 victories and six NCAA tournament appearances.

Raveling became Nike’s director of international basketball when he retired in 1994. He has written books on basketball and served as an analyst on college broadcasts. In 2013, he received the John W. Bunn Lifetime Achievement Award from the Naismith Memorial Basketball Hall of Fame.

On the Roster:Coming Events in Black College Sports