Latest March on Washington Focuses on Not Going Backward 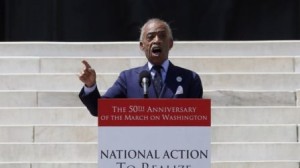 The Rev. Al Sharpton challenged young Black men to respect women and reminded them that two of the leading figures in the civil rights movement of the 1960s, Rosa Parks and Fannie Lou Hamer, were women.

WASHINGTON — Tens of thousands of people packed the Lincoln Memorial and the National Mall on Saturday to commemorate the 50th anniversary of the March on Washington where Dr. Martin Luther King Jr. delivered his “I Have a Dream Speech.”

One by one, 50 speakers called attention to contemporary issues like policing tactics and voter disenfranchisement to argue that in so many ways the country continues to struggle, as civil rights activist Reverend Al Sharpton put it, with “issues that have stood in the way” of fulfilling King’s dream.

Sharpton, the co-organizer of the march along with Martin Luther King III, the son of the slain civil rights leader, said that the Supreme Court’s decision in June to strike down a key anti-discrimination provision of the Voting Rights Act of 1965 was an example that the nation is moving in the wrong direction when it comes to civil rights.

“They are changing laws all over this country,” said Sharpton, the MSNBC host and founder and president of National Action Network, the civil rights organization he founded in 1991. “Congress needs to deal with what the Supreme Court has done.”

U.S. Attorney General Eric Holder credited King and the civil rights movement with training a spotlight on “a sacred and unmet promise” from America.

“Their march is now our march,” Holder said. “Our focus has broadened to include the cause of women, of Latinos, of Asian-Americans, of lesbians, of gays, of people with disabilities and of countless others across this great country who still yearn for equality, opportunity and fair treatment as we recommit ourselves to the quest for justice.”

Two days before Holder’s appearance at the march, the Justice Department went to court to block Texas’ tough new voter ID law, implemented after the Supreme Court gave its ruling on the 1965 Voting Rights Act.

“This morning, we affirm that struggle must and will go on until every eligible American has a chance to exercise his or her right to vote,” said Holder, who publicly recognized the sacrifice of King and others who assembled on the mall that sweltering August day in 1963. “But for them, I would not be the attorney general of the United States, and Barack Obama would not be president of the United States.”

Holder’s message resonated with Vivian Tisdale, a retired college professor who journeyed back to the memorial five decades after attending the original march.

“It’s important to understand that back in 1963 the focus was on jobs and justice. Sometimes we forget that,” said Tisdale. “Today, the focus is still on jobs and justice. The attacks on affirmative action and the deep cuts to financial aid and other support programs will mean that it will be harder for minority students to gain admittance into college and much harder for them to graduate, as a result of these vicious and mean-spirited attacks on the programs that have a proven track record.”

There were calls for the repeal of New York’s stop-and-frisk policy and the controversial Stand Your Ground laws.

“My father dreamed of a country where his children will not be judged by the color of their skin but the content of their character,” King III said, “but Trayvon Martin shows that we are still profiled.”

The parents of the slain 17-year-old Florida teenager later stood at the podium with Sharpton a month after George Zimmerman was acquitted of killing their son.

“We have to fight for our children,” said Sybrina Fulton, Martin’s mother.

U.S. Representative John Lewis, the last surviving speaker from the 1963 march, drew thunderous applause from the audience when he approached the podium.

“Fifty years ago, I stood right here in this very spot. Twenty-three years old, had all of my hair and a few pounds lighter,” said Lewis, who, in 1963, was chairman of the Student Nonviolent Coordinating Committee, the civil rights organization that was responsible for helping to organize sit-ins, freedom rides and the historic March on Washington.

“I come back here again to say, for the most part, those days are gone but we have another fight. We must stand up and fight the good fight as we march today for there are forces, people trying to take us back. No one’s gonna take us back. We cannot go back. I am not going to stand by and let the Supreme Court take the right to vote away from us. You cannot stand by. You cannot sit down. You got to stand up. Speak up. Speak out, and get in the way. Make some noise!”

Sharpton challenged young Black men to respect women and reminded them that two of the leading figures in the civil rights movement of the 1960s were women.

King III said that he and Sharpton have made plans to hold forums across the country to directly address the issues raised at the march.

“This is not the time for nostalgic commemoration,” he said. “Nor is this the time for self-congratulatory celebration. The task is not done. The journey is not complete. We can and we must do more.”

On Wednesday — the actual August 28 anniversary of King’s speech — President Obama will join former U.S. Presidents Clinton and Carter at a ceremony in D.C.