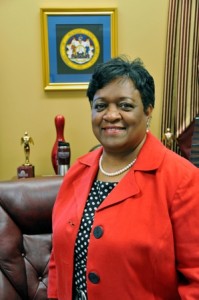 Dr. Juliette Bell is president of the University of Maryland Eastern Shore, her first stint as a university chief.

When the presidential elite at HBCUs nationwide began a precipitous churn two years ago through a revolving door of resignations, retirements and terminations, many in the higher education community wondered about the fragility and collective futures of these historic institutions.

The world around HBCUs is shifting at a dizzying pace, and most are having difficulty staying abreast of the changes. The turbulence has quieted, for a bit, on at least one important front—the selection of those responsible for the foreseeable future of HBCUs. This summer, nearly two dozen permanent or interim presidents have been appointed at HBCUs, reflecting a major turnover of leadership in such a short time.

But this new crop of presidents possesses qualifications that differ from the typical HBCU president. As a group, the new presidents are younger than their predecessors and consist of more women. They are less likely to be pure academics with rich backgrounds in higher education. They are savvier in the use of new technology and social media and keenly aware of the new emphasis on fundraising as a key to sustainability.

“They are going to make some differences for us,” says Dr. Lezli Baskerville, president of the National Association for Equal Opportunity in Higher Education (NAFEO), the Washington-based trade association of presidents of HBCUs. “They are primed and ready to use the full force of social media to employ entrepreneurship.”

Leadership diversity, new ideas and skills aside, the new presidents acknowledge that the higher education landscape will require all the strength they can muster and with fewer resources to do so.

“We’re having to be more efficient in how we use and manage our resources,” says Dr. Juliette Bell who, in July, ended her first year as president of the University of Maryland Eastern Shore, her first stint as a university chief.

“It’s a challenge to base that access mission with performance bases,” she adds, referring to the new trend by many funders, especially state and federal politicians and policymakers, of embracing metrics to measure almost everything.

Michael Sorrell, a 46-year-old former investment securities lawyer and president of Paul Quinn College in Dallas, agrees. “We’re in a fight for our lives,” he says. “We [the higher education community and its supporters] are in conversations to move from value to cost.”

“Until we reframe the conversation to value, I’m not sure what we can expect,” says Sorrell, whose small college had about 18 months left to survive when he was appointed six years ago.

“Our president population has been aging for a long time,” says Kent Smith, the 42-year-old president of Langston University, noting the mean age of presidents is about 65. Smith started his post in June 2012 after serving as dean of students at Ohio University in Athens, Ohio.

He continues, “We’re [HBCUs] not collectively pivoted toward being a modern university. I hope we can come to a time when we understand it’s time to pivot.”

The new generation is busy bringing in fresh ideas, some small and novel, others broad and sweeping. Some new presidents are pulling some old ideas off the shelf for refurbishing and recalibration. All hope their approaches work in these new and trying times for HBCUs. But the presidents stress that, since every institution is different, there is no cookie cutter approach to what they inherited or are doing with the hand they were dealt.

Fisk University, for example, has had to scramble for funds, students and stable management in the past decade, leading the Southern Association of Colleges and Schools (SACS), the higher education accrediting agency in the region, to place Fisk on probation. The university’s new president, H. James Williams, former dean of the college of business at Central Michigan University, has spent his first six months on a serious mission to strengthen the university’s finances, management and oversight.

Grambling State University, among other state universities across the country, has seen its once-reliable annual state aid slashed in recent years. It has had to postpone big ideas while it cuts departments, programs and staff. The same action was taken last year by Florida A&M and is being forced upon the state-controlled institutions in North Carolina, among others.

Despite the challenges, the new presidents are finding ways to make a difference.

Smith, for example, makes sure Langston’s students have his cell phone number and that his top aides do as much as they can to be accessible.

“Students are looking for service and response,” Smith says, explaining that today’s presidents must be keenly aware of the tone and tenor of today’s students’ needs and expectations.

Sorrell scrapped Paul Quinn’s money-losing football program during his first month on the job. The scarce funds could be used to finance institutional programs and scholarships, he says. The football field, meanwhile, is now used as a farm that produces food, some of which is sold to the Dallas Cowboys for meals. As part of its public service mission, the institution gives 10 percent of its crops to the needy in the area.

As part of its effort to find niche programs that will attract diverse students, Bell touted UMES’s professional golf management program. It is the only HBCU with a PGA-accredited program, she notes, saying she is promoting “niche programs where we can excel.”

As for the increasing number of women at the table of presidents, both men and women agree it will help expand the dialogue about the future. Meharry Medical College has installed a woman as interim president. Morehouse has named a woman as president-designate to succeed its current president who is set to retire next year, marking the first time in history two women will be running independent schools of medicine.

Several presidents acknowledge that women are usually good fundraisers since they are as good, if not better, at relationship building and have different management styles from men.

“When women are working, for them, it’s about nurturing friends and relationships so people feel good about making an investment in my university,” says Central State University’s new president, Cynthia Jackson Hamilton, echoing others.

“Women are more detail-oriented and they detail differently than men,” adds Hamilton. “Women are more attentive to various dimensions of management, like pay, personalities and interpersonal communications, and women look at things systematically.”

Tennessee State’s rookie president, Dr. Glenda Glover, former dean of the school of business at Jackson State University in Mississippi, says she has worked hard at developing an ongoing dialogue with Tennessee State’s various constituents on and off the campus. She also lives on campus in order to have a greater sense of life at her alma mater.

Veteran HBCU president Dr. William Harvey, now in his 36th year at Hampton University, says his new president colleagues are facing challenges not much different than what he faced when, at age 37, he was named president.

Today, Hampton has an endowment of $250 million and an enrollment of 5,500 students, but the university was going broke when Harvey took the reins.

“People said I wouldn’t last a year,” he recalls.

His promise to his board of trustees was he would run Hampton “like a business to meet educational objectives.” Since then, Harvey has succeeded in reining in out-of-control spending and has “tried to start early on a culture of innovation,” he says. The university now operates a major cancer treatment center and has a real estate portfolio to ensure a varied stream of income.

When asked what advice he would share with the new presidents, Harvey advises that they “understand the dynamics of finance,” as well as secure a strong faculty and have a mentor. Also, presidents need to “understand” their role with respect to their governance boards. Finally, have a story to tell about their university.

“I went out and told Hampton’s story,” Harvey says. “You can’t do it sitting at your desk, holding meetings.”