Institutions Grapple With Costs of Health Insurance for Adjunct Faculty 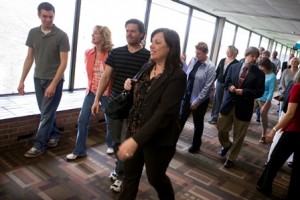 Part-time instructors known as adjuncts don’t get paid the same rate as regular faculty. They don’t have job security or pensions through the colleges where they work. They don’t have even a cubbyhole of an office on campus. Few have union rights.

But some adjuncts will get health insurance under Obamacare. The Affordable Care Act of 2011 requires employers with more than 50 full-time employees to provide health insurance if they work an average of 30 hours per week. The Obama administration says the mandate does cover adjuncts who spend that much time in their combined work in and outside the classroom.

The employer mandate to provide medical coverage was initially scheduled to go into effect next January. To avoid the added costs, at least two dozen colleges earlier this year cut the number of courses taught by adjuncts in order to keep them below the 30-hour threshold, according to media reports. Those schools, mostly public, are located in eight states. The course limits also reduced the already low incomes of part-time instructors.

“The idea of cutting back employees as a way to avoid a law clearly intended to extend health care coverage in itself is reprehensible,” says John Curtis, director of research and public policy at the American Association of University Professors, or AAUP.

Organizations representing colleges, however, contend the Affordable Care Act imposes a heavy financial burden on schools at a time when publicly funded ones, in particular, are coping with budget cuts.

College organizations have also sought clarification from the Internal Revenue Service, which issued draft regulations in January on how to calculate the off-campus working hours of adjuncts. Colleges and the instructors themselves have not kept such timesheets. Unions that represent a small number of adjuncts and the AAUP have also asked the IRS to spell out timekeeping methods.

“An adjunct faculty member is probably doing work off campus — grading papers, planning lessons, going to the library, etc. — and we have no easy way to keep track of that,” says Terry Hartle, senior vice president of the American Council on Education.

Colleges and the IRS will have more time to figure that out. In July, the White House postponed the implementation of the insurance mandate for all employers for a year. The National Restaurant Association has lobbied hard against the mandate, which it fears could cause some eateries to go out of business. College organizations did not seek the delay.

“We did not lobby for the one-year delay in the employer mandate provision and were, like many others, taken by surprise,” Hartle says. “We think it is far more important that the administration take the time and get this right than move too quickly with important issues unsettled. So we are pleased by the decision.”

But the mandate is still scheduled to take effect. When it does in January 2015, it will have the biggest impact on community colleges and adjuncts who work at them. Community colleges depend more on part-timers than any other part of higher education. About 90 percent of the schools are publicly funded.

Providing health insurance would distort the compensation of adjuncts, Baime says. He cites the example of one school in Pennsylvania that pays close to the community college average of $2,250 per course.

The college’s president says health insurance would cost the school $8,000 a year. That would amount to more than half the $13,500 in pay earned by an adjunct who taught three courses a semester, for a total of six in an academic year. Most full-time professors teach five courses per semester at community colleges.

“No one considers the overwhelming majority of adjuncts full-time employees. That’s just a reality,” Baime says. “Work as an adjunct was never meant to provide a full-time, family-supporting lifestyle kind of wage.”

Colleges of all kinds have reduced part-time teaching hours in at least five other states, according to media reports: Colorado, Florida, Illinois, New Hampshire and Virginia.

Curtis of the AAUP recognizes the budget crunch on public and community colleges.

“Our argument has been twofold,” he says. “There needs to be increased funding or even restored funding for higher education as a social investment that benefits all of society.

“The other is making sure that the focus and spending is on the core mission of teaching and research,” he adds.

State governments whose public colleges avoid the insurance mandate will not avoid the costs, Curtis says, but only shift them to Medicaid for low-income residents or the state insurance exchanges being set up under the Affordable Care Act to offer subsidized coverage. “The taxpayers are going to end up footing the bill in some respects, I think,” Curtis says.

Even though the Obama administration postponed the employer mandate, public colleges in Virginia have limited course hours of adjuncts for the coming school year. A new state policy, adopted in response to the looming mandate, prohibits all state employees from working more than an average of 29 hours a week.

Norfolk State’s limit assumes adjuncts spend at most about two hours working outside the classroom for every hour spent teaching.

The draft IRS rules would vaguely require schools to adopt a “reasonable method of crediting hours of service” outside the classroom. Representatives of colleges and adjuncts are debating what the best method is. Some have suggested the two-hour standard that Norfolk State uses.

But the American Council on Education says it is more common for colleges to assume one working hour outside the classroom per hour of teaching. The council has proposed two timekeeping alternatives for adjuncts. At community colleges, adjuncts would have to teach four courses a semester to qualify for health insurance as full-time employees.

“We have lots of different types of colleges and universities, and they do things differently,” Hartle says. “We need and we have asked for guidance from IRS. But there are no easy answers that will satisfy anyone.”