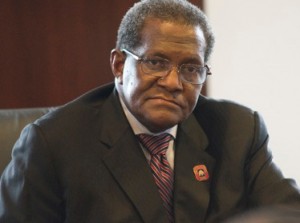 President Obama has tapped a veteran educator who was pressured to step down as president of South Carolina State University in 2012 to be the new executive director of the White House Initiative on Historically Black Colleges and Universities (HBCU’s).

Dr. George Cooper will be the administration’s public face for HBCU’s, working with Secretary of Education Arne Duncan and 32 other federal agencies that provide grants and financial assistance to the nation’s black colleges.

Dr. Ivory A. Toldson, a tenured associate professor of education at Howard University and a rising star in academia, has been selected by the White House to serve as Cooper’s deputy director.

Cooper fills the vacancy left behind by Dr. John Silvanus Wilson Jr., who left the post to become president of Morehouse College in Atlanta earlier this year.

“I am honored to join the Obama Administration as Executive Director for the White House Initiative on Historically Black Colleges and Universities (HBCU’s),” Cooper said in a statement. “As Executive Director, I am committed to promoting excellence, innovation and sustainability of HBCU’s. I look forward to working with Secretary Duncan, federal agency heads, HBCU leaders, The President’s Board of Advisors, other higher education and HBCU advocacy groups, and private sector partners.  Our success will help assure that our Nation has the highest proportion of college graduates in the world by 2020.”

Toldson, who was named as an Emerging Scholar by Diverse earlier this year, said in an interview that he is “thrilled to be involved” with the initiative, adding that the new position will allow him to be a stronger advocate for students. He added that he will focus his efforts on recruitment and retention of students, while building a strong alumni network of HBCU graduates.

“I want to focus on which HBCU’s are doing it right,” said Toldson, whose groundbreaking research focuses on African American school-age males. “I’m a scholar and an activist out of the ivory tower, so I want to continue to make sure that the initiative is publishing and disseminating information to the public.”

Toldson said that he began conversations with the White House earlier this year about assuming a leadership post with the initiative. Although he said that he has not yet met Cooper, he is familiar with Cooper’s work.

Cooper served as South Carolina State University’s 10th president from 2008 until 2012. Several faculty members at the university were shocked to learn of his appointment. During Cooper’s tenure at the school, he routinely clashed with faculty and was accused of not doing enough to address declining enrollment. The university’s board of directors fired him in 2010, but he was quickly reinstated.

Prior to becoming president of SCSU, Cooper spent 17 years with the U.S. Department of Agriculture’s National Institute of Food and Agriculture, and was Vice President for Academic Affairs and Professor of Animal Science at Alabama A&M University.

Cooper could not be reached for comment, but several educational advocates said that he is the ideal choice.

“He is very capable and has a stellar track record,” said Jennings. “I think it’s great that he chose someone who has been a college and university president of a HBCU and knows what we have to deal with on a daily basis.”

Lezli Baskerville, President and CEO of the National Association for Equal Opportunity in Higher Education, said that Cooper “will strengthen our voice as we seek to enhance the position of all 1890 land-grant HBCU’s in the Farm Bill, while we work with the federal government to incentivize and use the full range of its powers to prod states into investing in public HBCU’s [so] that they are comparable to and competitive with their historically white counterparts.”