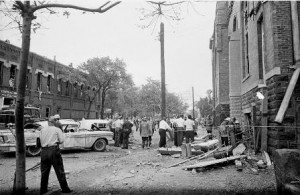 On September 15, 1963, four girls were killed by a bomb planted in the 16th Street Baptist Church in Birmingham, Ala.

If they had lived beyond the morning of September 15, 1963, four girls — Addie Mae Collins, Denise McNair, Carole Robertson and Cynthia Wesley — who had just attended Sunday school at the 16th Street Baptist Church in Birmingham, Ala. would now be in their sixties.

Instead, on that fateful Sunday 50 years ago, white sheets shrouded four small, Black corpses being wheeled through the Colored Only entrance of the emergency room at the University of Alabama, Birmingham’s (UAB) University Hospital. Before the carefree girls had a chance to bound up the basement stairs to the sanctuary for worship, a bomb planted in their church by the KKK killed them where they stood at 10:22 a.m. The blast injured other parishioners and ripped through sacred walls. When the ambulance carrying their mangled bodies pulled up to the hospital on the way to the morgue, an injured church member standing at the door recognized one of the girls by her shoe, she recounted decades later in an oral history.

The nation and the city of Birmingham is paying tribute this month to the slain young girls and remembering the civil rights organizers who initiated marches for freedom and equality from the steps of the 16th Street Baptist Church. Rep. Terri Sewell, D-Ala., who co-authored the initial legislation to posthumously award the Congressional Gold Medal, the nation’s highest civilian honor, to the four girls on September 12, credited the children’s sacrifice.

“I not only question where I would be without the influence of these four little girls, but more importantly, I question where America would be,” she said.

Five decades ago, University Hospital was inching toward integration, even as the walls of segregation elsewhere in Birmingham seemed immovable, said Timothy L. Pennycuff, assistant professor and university archivist at UAB. But the bombing deaths served as a catalyst for the change that some White hospital administrators and university deans wanted to see inside the facility.

For Pennycuff, “September 15, 1963 will forever be remembered for the bombing … an event that took the lives of four children and shocked the world.” But when he lectures about that sorrowful Sunday, Pennycuff’s recounting begins in UAB’s then-segregated hospital emergency room and focuses on the quiet fire that had begun brewing inside.

UAB’s archives include oral histories, news clippings, letters — some fragile and handwritten — and stark black and white photographs of the hospital’s wards separated by race. Stitched together, Pennycuff said, they tell the story of the hospital’s gradual, “largely peaceful and quiet,” transition from segregated to integrated medical treatment and employment. Those pieces of history also provide a backdrop to a Sunday morning filled with terror, carnage and chaos.

“Fearing all hell [was] going to break loose,” Pennycuff continued, Lyons dispatched his residents to the hospital. As in war, there were casualties, bombing victims to treat and lives to save. Chief surgery resident Joseph McDonald Jr., M.D., was assigned to work in a temporary morgue. “His name appears on the four girls’ death certificates,” explains Pennycuff.

In the mob outside the hospital, about 15 people wounded in the explosion and another handful injured in street protests and clashes with angry White mobs following the bombing also made their way to the Colored emergency entrance. They faced a swarm of “state troopers and city police, some carrying shotguns or bayoneted rifles” as they barricaded the 6th Avenue South entrance, Pennycuff said. Holt McDowell, M.D., another resident, tended to the injured in the emergency room.

“It was an experience you really never forget,” McDowell said of that Sept. 15 day when he was interviewed years later.

UAB’s history records also credit Dr. Joseph F. Volker, D.D.S., a northerner who directed health affairs in the early 1960s, with orchestrating efforts to hire Black physicians and integrate the university’s medical and dental schools, as well as the hospital’s wards and treatment areas. In September 1963, UAB — then a branch campus of the flagship University of Alabama, Tuscaloosa — enrolled its first Black student. In the fall of 1964, another 44 Black students were admitted, Pennycuff said of the swifter changes that came to the campus. At the hospital, though, signs designating entrances and spaces based on skin color still hung in place weeks after the bombing deaths and even after Volker ordered their gradual removal.

“This sign which glares at me as I enter and leave my office has become so intolerable to me that I had to remove it,” Siegel bemoaned in his “really, really powerful handwritten letter” 50 years ago to a hospital chief, Pennycuff said. “In view of recent events in our city which took the lives of innocent children, signs such as these constantly remind me of the effect of my failure as a citizen, and the failure of this institution of higher learning, to exert a constructive influence in our community … P.S. If you think this was written in a moment of fury; you’re right.”

The typed multi-page response Siegel received assured that even “in the midst of near chaos,” change at UAB’s hospital was wending its way: “The quiet, calm and inexorable pursuit of purpose is the real mark of institutional courage.” By 1965, the federal Civil Rights Act of 1964 and lawsuits filed by the NAACP brought down segregated signs in Southern hospitals and mandated integration.

Riding the Crest of a Wave