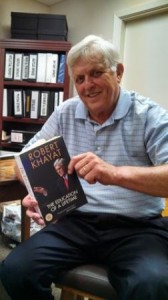 Robert Khayat was chancellor of University of Mississippi

JACKSON, Miss. — A skilled long snapper and a sure-handed holder. He had neither as placekicker for the Washington Redskins in the early 1960s. And that led Robert Khayat home to Mississippi, where he became one of the most influential administrators of higher education in state history.

Khayat, now 75, was University of Mississippi chancellor from 1995 through 2009. Under his leadership, Ole Miss was awarded one of 280 chapters in Phi Beta Kappa, considered the highest honors society in the U.S., established the Jim and Sally Barksdale Honors College, increased enrollment by 70 percent and opened the William Winter Institute for Racial Reconciliation in 1999.

He writes about his journey from his hometown of Moss Point to the chancellor’s chair at Oxford in his new book, The Education of a Lifetime, released Sept. 10 by Nautilus Publishing.

And, yes, he wonders how his life’s path might have veered had his kicking chores been made easier in Washington.

“Led the NFL my first year,” he says. “Both my snapper and holder left after that season, and they were really good. Made my job so easy. The next year, my snapper and holder were awful. My accuracy went from 80 percent to 50 percent. … Pat Summerall, who was kicking for the [New York] Giants at the time, told me a snapper and a holder could make or break a kicker. So I was like ‘I’m out of here.’ I might have played 15 years if things had stayed the way they were my rookie season.”

Khayat could never handle mediocrity. He wouldn’t stand for it at Ole Miss, his alma mater, where he was a tackle and placekicker on the Rebel squad that was awarded the 1959 national championship by four polls.

“When I was being interviewed for the chancellor position, I was asked what my vision was for Ole Miss,” Khayat recalls. “I said I wanted it to be perceived as one of America’s great public universities. I was sick of our state being first on the bad lists and last on the good lists.”

He knew his first duty would be to deal with race. In 1962, violence broke out when James Meredith became the first African-American to enroll at Ole Miss. In the early 1990s, fans were still waving Confederate battle flags at football games.

Khayat set out to disassociate the school from the flag, which was never endorsed as an official university symbol.

“The flag was an albatross around our necks,” Khayat says. “It was offensive to a lot of people. It was hurting our ability to recruit football players and students in general. But the issue of banning the flag wasn’t so simple: We couldn’t deny people’s rights to express themselves.”

In a meeting with his administrative team, Khayat adopted a way around it by banning sticks. “We ruled that the sticks were dangerous and impeded people’s view — both true.”

The national media took notice and applauded Ole Miss’ stand. Some fans weren’t impressed. Khayat writes about receiving death threats. The FBI was concerned for his safety and that of his wife, Margaret, and their two children.

“But I didn’t want bodyguards following me around,” he says. “I never believed anybody would kill me over a flag. Maybe I was naive, but that’s the way I felt.

“Plus, I had other problems to worry about. There was a time in the mid-1990s when the campus just looked tired. We’d had a 14 percent budget cut, which meant a reduction in workforce. Dr. [Donald] Zacharias was doing an outstanding job down at Mississippi State. We were drowning.”

Khayat decided to attack the problem in grass-roots fashion: He and his chief of staff, Andy Mullins, began visiting nearly every high school in Mississippi.

Khayat particularly remembers his visit to Jackson’s predominantly Black Provine High. “The people looked at me like I was an alien,” he says. “They told me the last thing they expected was for the chancellor of Ole Miss to walk through their doors, and we wound up getting some of their top students that year.”

Ole Miss’ enrollment on the Oxford campus was hovering around 10,000 when Khayat and Mullins began their tour. It had grown to 17,142 in 2012-13, with minorities accounting for 24 percent. Enrollment surpassed 18,400 this school year.

“His dedication to diversify the student body made a tremendous difference in changing the university’s climate,” Mullins said of Khayat.

“One of the proudest days of my life,” Khayat says. “I read a quote from Bob Schieffer of CBS News. He said that when he was here in 1962 to cover James Meredith, he was more frightened than he had been covering the Vietnam War. But when he came back to Ole Miss and saw the way the university and the town is today that he knew he was seeing ‘a new America.’ … I think it spoke volumes of how far Ole Miss and Mississippi have come.”

Black Women in the Academy: Promises and Perils. – book reviews