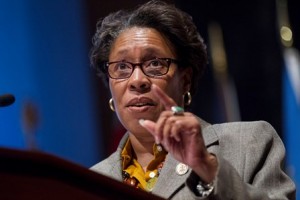 U.S. Rep. Marcia L. Fudge, the Congressional Black Caucus chairperson, says “there is still the hope and promise of better days to come.”

WASHINGTON, D.C. — Voting Rights and the investment in STEM education was among the many topics discussed at the annual Congressional Black Caucus Foundation legislative conference that kicked off at the Walter E. Washington Convention Center yesterday.

The four-day program also trained a national spotlight on Stand Your Ground laws and racial profiling, which drew protests among the public in the aftermath of the shooting death of 17-year-old Trayvon Martin in Sanford, Fla., by neighborhood watchman George Zimmerman.

“The time has come when we have to address these equity issues front and center,” said Jackie Williams, an adjunct college professor who traveled from New York City to attend the conference. “I’m here looking for real solutions to real problems. I want to engage with political leaders about the problems that confront our people. I’m tired of the talking.”

A policy-wonk conference that was first convened more than 40 years ago by African-American lawmakers has become one of Washington’s most important events for networking. But as the nation commemorates the 50th anniversary of the 1963 March on Washington, the assassination of Medgar Evers and the bombing of the 16th Street Baptist Church in Birmingham, the organizers of the CBC reminded the attendees that the journey toward racial progress has at times been slow.

“There are currently a number of challenges that we face as Americans, yet there is still the hope and promise of better days to come,” said U.S. Rep Marcia L. Fudge, who chairs the CBC. “We hope to inspire a new generation of leaders to become actively involved in the well-being of their communities and to become politically engaged.”

College students were front and center at this year’s conference. Cynthia Moore, a student at the University of the District of Columbia, said that she attended the conference because she is worried about mounting college debt and the lack of jobs. “Everyone is telling our generation to go to college, but what are we to do when we graduate? There are not enough jobs out there. It’s very frustrating for many of us.”

Basketball legend Dr. Shaquille O’Neal led a session that focused on the drinking behaviors and attitudes among African-American students, an issue that has become a major problem for college administrators at Historically Black Colleges and Universities.

And earlier this week, the foundation announced a $5 million investment in five African-American-owned banks in an effort to spur lending in communities of color. “This investment is an important step toward achieving our goal of economic equality,” Shuanise Washington, chief executive of the foundation said. “Minority banks are an important source of accessible financial services and are key to reaching financially underserved communities.”

President Obama will keynote the Phoenix Awards Dinner on Sept. 21, where former President Bill Clinton, Rep. Elijah E. Cummings of Maryland and Elaine Jones, former president and director-counsel of the NAACP Legal Defense and Educational Fund will be among those honored by the foundation.

UPenn’s Criminology Department Is a First For an Ivy League