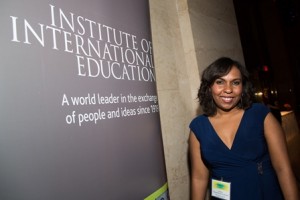 Larissa Almeida Sento Se Nunes is studying in the U.S. through the Brazil Scientific Mobility Program.

New York – Before she came to study in the United States through the Brazil Scientific Mobility Program, Larissa Almeida Sento Se Nunes never thought chemical engineers had much influence in the world of pharmaceuticals.

But after working an internship this past summer at Merck & Co.—the New Jersey-based international pharmaceutical firm—Nunes has gained a new awareness for the role that chemical engineering students like her might play in developing drugs of the future.

“I didn’t even know that I liked it because I didn’t know about it,” said Nunes, a chemical engineering major at Universidade Federal da Bahia in the Brazilian city of Salvador.

Nunes, who studied last spring and is continuing her studies this fall at the Stevens Institute of Technology in Hoboken, N.J., was one of several students on hand recently at the Institute of International Education Gala 2013.

At the event, Brazilian President Dilma Rousseff was presented with the Henry Kaufman Prize for her vision to establish the Brazil Scientific Mobility Program. The prize—named after Henry Kaufman, president of Henry Kaufman & Company Inc., an economic and financial consulting firm—is meant to recognize national leaders and public officials who do distinguished work in the promotion and development of international education at the postsecondary level.

In the U.S., the Scientific Mobility Program began with 587 students but has since grown to 3,673 for the current academic year. More than 1,000 of the students got internships at international companies, Kaufman noted in presenting the award.

“It is inspiring to think about what the students with us tonight—and thousands of others in the Brazil Scientific Mobility program—will accomplish in the 21st century,” Kaufman said.

“I have no doubt that this experience for (students) will open new horizons,” said Brazilian Education Minister Aloizio Mercadante, who accepted the award on behalf of President Rousseff, who could not attend due to a scheduling conflict. “I have no doubt that working on a factory floor will strengthen their professional careers.”

Through the program, Mercadante said, the Brazilian government hopes to grant more than 100,000 scholarships to STEM students from Brazil to study abroad at the world’s top universities. The Institute of International Education, or IIE, runs the program in the United States.

Currently, 53,000 Brazilian students have received scholarships through the program and are studying in 35 countries, but the United States is the top choice as a destination, according to Mercadante.

“The labs and classrooms and everything here is so much better,” Nunes said. In Brazil, she said, “We don’t have all the equipment we need for what we’re doing. I feel like here we always have the best of the best.”

The American approach toward learning is different as well.

Mercadante echoed Nunes when he remarked that the only complaint he has heard from Brazilian students about their experience in the U.S. has been about “too much homework.”

On the institutional side, the Scientific Mobility Program is a “great way” for American universities to help diversify their student bodies, said Edward Monks, Director of Enrichment and Professional Development at IIE.

“Most students are from India and China, so this is a great way to diversify that population,” Monks said. “These students are very ambitious, very involved in a lot of the campus activities.”

He also noted that the program is fully funded by the Brazilian government, “so that’s really a help to the universities.”

“The other benefit is that, when the students go back to Brazil, they’re going to create linkages between universities where they studied in the U.S. and institutions [in] Brazil,” Monks said. “They’ll be talking up the U.S. as a study abroad destination and talk about specific institutions.”

For any American college and university official who may want to apply to participate in the Brazil Scientific Mobility program, Monks said they should first make sure they have a strong program in a specific field of interest to STEM students from Brazil.

He said the Scientific Mobility Program is expected to run at least until January 2015, but its continuance afterward is dependent on a host of factors, including whether President Rousseff wins re-election in 2014.

Mercadante noted that Brazil recently approved a measure to designate 75 percent of the nation’s oil royalties toward education over the next 35 years.

“We want to transform a non-renewable wealth into a permanent wealth, which is the education of a nation,” Mercadante said.

“And if you think 100,000 students are a lot, wait until the Brazilian oil royalties come in,” Mercadante said. “We’re sending more your way.”

Meanwhile, students such as Nunes hope to use their experience in the United States to solve problems back home.

“In my internship, I had the opportunity to learn more about vaccines,” Nunes said. “Hopefully, I’ll be able to apply what I learned here (in the United States) in Brazil.”

At Diversifying Colleges Tenure Still a Hurdle for Women, Minorities

Getting Published While Black

The Realization of What You are Teaching