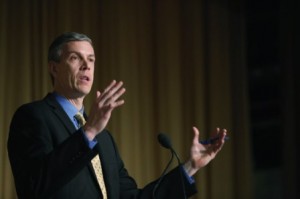 WASHINGTON, D.C. — U.S. Secretary of Education Arne Duncan issued a public apology to the leaders of the nation’s historically Black colleges and universities (HBCUs) for the Obama administration’s decision to change the criteria of the popular Parent PLUS Loan program without consulting with them first.“I have talked with many of the people in this room about the PLUS Loan challenges, and I know it’s been hard, it’s been frustrating, and some of you are angry,” Duncan told the HBCU college presidents, administrators and faculty who gathered at the Hilton in Washington, D.C. for the kickoff of the National HBCU Week Conference. “I am not satisfied with the way we handled the updating of PLUS Loans, and I apologize for that.”

The apology comes after a year of heightened tensions between HBCU college presidents and the administration following a dramatic decrease in student enrollment at many of the 106 HBCUs after thousands of parents were deemed ineligible for the popular loan program due to the new credit criteria imposed by the Department of Education.

Earlier this year, relations had deteriorated to the point that several college presidents were floating around the idea of suing the administration.

But today, Duncan received a warm reception, with Dr. William Harvey, longtime president of Hampton University and chair of President Obama’s Advisory Board on HBCUs, calling him a “friend.”

Despite the PLUS Loan debacle, Duncan said that the administration has never faltered in its firm commitment toward HBCUs. He said that during President Obama’s first term, the administration secured large increases in higher education funding, adding that the funding for HBCUs increased from $3 billion to $4 billion between 2007 and 2012. Another $600 million in loans was invested into capital projects during that same period.

The problem, Duncan said, is that new funding has been stalled by the Republicans in Congress.

“In his 2014 budget, President Obama requested over $228 million in funding for HBCUs, but the Republican-controlled House of Representatives has refused to take up the president’s budget,” he said. “The fact is that Washington is currently engaged in a bitter battle over two competing theories of education and its relationship to economic growth. And the outcome of this debate has enormous consequences for our children, our economic competitiveness and for HBCUs.”

In addition to funding and the PLUS-Loan programs, some administrators at HBCUs expressed concern about a new initiative Obama announced, charging the Education Department with developing a college rating system for the start of the 2015 school year. Under the plan, the college rating system would be used to transform the way federal student aid is awarded to students, starting in 2018.

“I know that many of you are concerned that the college ratings system President Obama has asked our department to develop will fail to take account of the special challenges facing HBCUs. That will not be the case,” said Duncan. “Over the course of the next year, we are going to solicit input on the ratings systems from literally hundreds and hundreds of stakeholders, including HBCU leaders, students and parents.”

Duncan said that the matrix for the rating system has not yet been developed, but that it will “rely on multiple measures — not one or two crude measures of college value.”

Lezli Baskerville, president and chief executive officer of the National Association for Equal Opportunity in Higher Education, said that she was intrigued by the new system, which will help institutions address issues of access, affordability and outcomes.

“We welcome the opportunity to help come up with a matrix that makes sense.”

Colleges and Universities Must Not Rest On Their Laurels