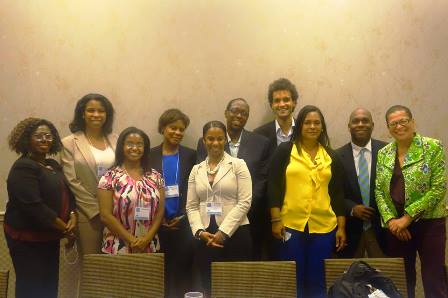 PHILADELPHIA—More than 450 conference attendees from various academic disciplines and interests converged onto Philadelphia last Thursday to participate in a two-day inaugural conference of the Black Doctoral Network Conference (BDN).

Despite the nearly 2,000 African-Americans who earn doctoral degrees in this country every year, they often go unnoticed and unrecognized even though many are engaged in cutting-edge research. According to the conference organizers, they are invisible minorities.

“Our success needs to be seen and celebrated,” says Maurice Green, a doctoral student in criminology at the City University of New York (CUNY) who organized the conference and founded the BDN in 2011. “If other Blacks don’t see us, they can’t inspire to be like us.”

Like many other African-Americans in academe, Green has had his share of frustrating moments. At times, he has felt isolated and lonely while pursuing his degree. Several years ago, he actively sought out the opportunity to meet other Black doctoral students and recent Ph.D. recipients from surrounding New York institutions and subsequently came up with the idea to establish BDN—a clearinghouse of sorts—aimed at connecting Black Ph.D.s and soon-to-be Ph.D.s for networking, collaborating, and even publishing with each other across academic disciplines.

What started as a networking opportunity on Facebook has morphed into a full-fledged organization with a clear message: to bring together Black academicians to help generate real solutions to some of the country’s most vexing problems.

“It’s really important that we dismantle this idea that scholars can’t be activists,” says Green, who is in the final stages of completing his dissertation on African-American males who hail from impoverished backgrounds and have gone on to become university professors. “We are all operating in the silos of our discipline, and we are not talking to each other.”

At the conference, workshops and panel discussions focused on a diverse set of issues, including racism in higher education, formulating the dissertation committee, publishing a dissertation into a book and securing funding for research projects.

“This is not a conference about the Black intelligentsia and fluff,” says Green. “We have scholars at the top of their craft who are here to talk about their research and who will have a qualitative impact.”

Predominantly White colleges and universities across the country have long struggled with how to keep talented African-American faculty on their campuses. Many newly minted African-American Ph.D.s report feeling overwhelmed, overburdened and politically unprepared for life in the academy. At many institutions, they are often the only Black in their department.

“It is nice to see a sea of Black people coming together to better ourselves as researchers, practitioners and, in the process, [a] better society as a whole,” says Dr. Lynette Tannis, who graduated in May with a doctoral degree in education and now works as an educational consultant with the Center for Educational Excellence in Alternative Settings. Her research interest focuses on providing educational opportunities to those who are incarcerated.

“We are talking about issues that are relevant to us—Black people and people of color,” she said.

For its debut, Green managed to attract heavy hitters within the academy to lend their name and support to the cause. Drs. Cornel West, Julianne Malveaux and William Julius Wilson were the keynote speakers, and all emphasized the importance of such a national gathering. They joined other well-known presenters such as Dr. Camille Charles, Dr. Rick Kettles and Dr. Ivory Toldson, who was recently appointed deputy director of the White House Initiative on Historically Black Colleges and Universities.