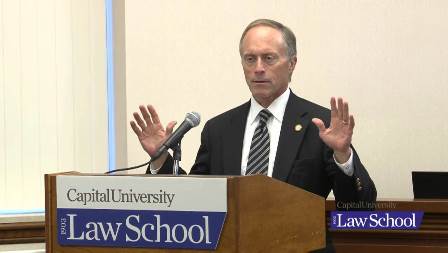 COLUMBUS, Ohio — Enrollment is down at Ohio’s five public law schools, and the number of applications has declined even more.

As students consider their chances of getting hired and debate whether the cost of law school is worth it, the decreased enrollment in Ohio has led to some of the smallest classes in the past decade, The Columbus Dispatch reported

About 45,000 students graduate from U.S. law schools each year, but experts say there are only about half that many positions available for new hires. A typical graduate last year had loans totaling more than $100,000, but the average median salary for the previous year’s class was only about $76,000.

“The lawyer bubble has burst,” said Craig Boise, dean of the Cleveland-Marshall College of Law at Cleveland State University.

Nationwide, applications dropped 18 percent this year to the lowest level in three decades.

The entering class at the private Capital University Law School in Columbus decreased by 37 percent to 156 students this year.

“It’s a new world out there,” Simpson said.

In Ohio, law schools are graduating nearly twice as many students each year as there are positions, experts say.

That has led many schools to cut faculty positions and teach students more practical skills so they can find better jobs.

Making sure that students have the skills to find work is “job No. 1,” said Alan Michaels, dean of Ohio State University’s Moritz College of Law.

Several Ohio law-school deans also noted that students are no longer choosing law school just because they don’t know what they want to do with their lives.

“They’re coming in with their eyes open, and that makes them more serious about their studies and passionate about potential jobs,” said Daniel Steinbock, dean of the University of Toledo College of Law.