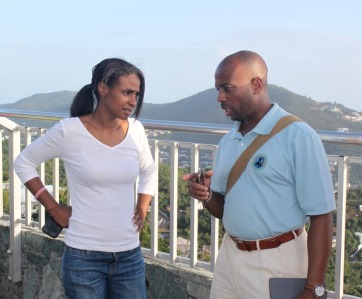 Dr. Jerlando Jackson (right), Professor of Higher Education at the University of Wisconsin-Madison and director of Wisconsin’s Equity & Inclusion Laboratory, talks with Kimberly Worthy, the 2009 Teacher of the Year for Washington D.C., on the opening day of the second annual International Colloquium on Black Males in Education. (Photo by Clifford White)

ST. THOMAS, VI — Some of the nation’s most prominent research scholars are gathering this week in St. Thomas to strategize solutions and share best practices on how to improve Black male achievement.

For the second year in a row, the three-day international colloquium has brought together researchers from various academic disciplines who are engaged in cutting-edge scholarship that focuses squarely on how to address what has become one of the nation’s most vexing problems.

“This has always been our vision,” says Dr. Jerlando F. L. Jackson, the Vilas Distinguished Professor of Higher Education at the University of Wisconsin-Madison and the director of the Wisconsin Equity and Inclusion Laboratory—a research center that is dedicated to conducting both basic and applied research on topics of equity and inclusion in education, with a particular focus on higher education.

The idea for a colloquium, he says, came in 2009 when he and Dr. James L. Moore, III, the College of Education and Human Ecology Distinguished Professor of Urban Education at Ohio State University (OSU) authored an article for the International Encyclopedia of Education and pointed out that girls in both the United States and other countries were quickly outperforming boys academically.

The two, who are considered leading experts in a growing field of scholarship that focuses on black males, first put out the call to academicians who traveled last year to the United Kingdom to begin what they now expect will become an annual conversation aimed at better understanding the unique challenges that Black males face, while also celebrating the many accomplishments that often go unreported.

For example, Dr. Rex L. Crawley who runs the Uzuri think-tank at Robert Morris University in Pittsburgh says that nearly 90 percent of African American males at his university go on to graduate from the institution, surpassing African American females in attendance.

“The negative stories have already been told,” he says. “We want to focus on the success stories.”

Despite the dismal overall numbers when it comes to high dropout rates for black males in high school and college, experts say that there are encouraging signs. During the panel discussions that will be held at the University of the Virgin Islands, the focus will remain on a wide-range of topics including black males and community engagement, the outcomes for black student athletes, and academic engagement among black males at predominantly white institutions.

“I want to be able to pick the minds of the different professionals who are here,” says Michael Golden, Jr., 19, a junior majoring in construction systems management at OSU who was selected to attend the colloquium. He like several of his classmates have been active in the Todd Anthony Bell National Resource Center which is headquartered at the university and whose focus is to engage in critical research studies focused on Black males.

Anthony Wright, 20, who is a junior at the University of Wisconsin- Madison says that he’s hoping that the colloquium will help him discover “retention strategies” that will help him to keep black males from dropping out on h is campus.

Wright, who is president of the Wisconsin Black Student Union, says that even as he contemplates going to graduate school to earn a Masters in Business Administration when he finishes his undergraduate studies, he would like to find a way use his degree in the college and recruiting process.

Clemson University, the African American Male Research Initiative at the University of Texas at Austin and XL Academics—a company that utilizes technology to foster a relationship between alumni and colleges—were among a dozen or so entities to sponsor the colloquium, which kicked off with a four hour tour of historical and cultural sites in St. Thomas.

Dr. David Hall, the president of the University of the Virgin Islands and Dr. Ivory A. Toldson, the deputy director of the White House Initiative on Historically Black Colleges and Universities are expected to address the participants.

HIV AIDS A Predator in Paradise

Ifill Ready to Resume Fight for the Marginalized

Study Abroad Participation Up, Except Among Minority Students