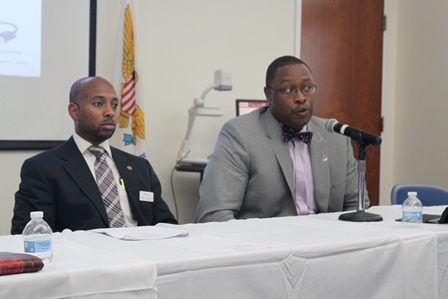 (Left) Dr. Jerlando F. L. Jackson, who directs Wisconsin’s Equity & Inclusion Laboratory and holds the Vilas Distinguished Professorship of Higher Education at the University of Wisconsin-Madison, on a panel with Dr. James L. Moore, III, who holds the College of Education and Human Ecology Distinguished Professorship of Urban Education at Ohio State University (OSU) and currently serves as associate provost and director of the Todd Anthony Bell National Resource Center on the African American Male at Ohio State University. (Photo by Clifford White)

Nearly 500 of the almost 1,200 Black males who are enrolled at Ohio State University have a cumulative grade point average of 3.0 thanks to the work of Dr. James L. Moore, III and the staff at the school’s Todd Anthony Bell National Resource Center on the African American Male.

Moore, who holds the College of Education and Human Ecology Distinguished Professorship of Urban Education at Ohio State University (OSU) and currently serves as associate provost and director of the Bell Center, revealed the encouraging numbers to dozens of scholars who have gathered this week in St. Thomas for the second annual international colloquium on Black males in education. .

While the six-year graduation rate of Black males at OSU still hovers at about 67 percent, Moore says that progress has definitely been made. “You have to know where we’ve come from,” he says matter-of-factly, often telling his students: “Your GPA is like your social security number. It sticks with you.”

In 2005, the university named the Bell Center after Todd Anthony Bell, the former OSU football player who later went on to play professionally for the Chicago Bears. It was founded to address issues in society that impact quality of life issues for Black males.

“Males in general and males of color in particular, are not functioning at an optimal level,” says Moore, who appeared on a panel with other noted researchers from colleges and universities across the country who shared best practices for recruiting and retaining African American males to their campuses. “We’re losing Black males at every generation.”

The three-day colloquium, organized and spearheaded by Dr. Jerlando F. L. Jackson who directs Wisconsin’s Equity & Inclusion Laboratory and holds the Vilas Distinguished Professorship of Higher Education at the University of Wisconsin-Madison, is largely focused on highlighting successful program outcomes that offer solutions aimed at solving the series of problems that confront Black males in education.

Dr. Chance W. Lewis, who holds the Carol Grotnes Belk Distinguished Full Professor of Urban Education in the College of Education at the University of North Carolina at Charlotte, says that despite the prevailing mythology African American male graduates continue to enter the education profession as elementary and middle-school teachers every year in droves.

“Many of them choose to go into teaching and remain despite the salary,” says Lewis, adding that it’s critical for seasoned Black male educators to make a career outside of entertainment and athletics “sexy to Black males” and its equally imperative for education departments on campus to aggressive recruit Black males into the major.

Last year, U.S. Secretary of Education Arne Duncan traveled to Morehouse College in Atlanta where he publicly launched a national effort to recruit 80,000 new Black male teachers into the classroom.  But it’s not clear what, if any, impact that campaign has had on increasing the overall numbers.

At the University of Virgin Islands (UVI), which was founded in 1962 and designated a Historically Black College and University (HBCU), the retention rate of Black males has steadily improved since 2009 when Dr. David Hall became university president.

“We are in the business of building men,” says Hall, who added that with the backing of the school’s board of trustees, the university has implemented  several college-wide initiatives, including supporting a student-led group called “Brothers With a Cause” that was formed by Black male students on campus to address their academic and social needs.

In addition, the university—which has campuses on St. Thomas and St. Croix—has created a partnership with the Virgin Island Department of Education called Junior University, where they provide academic and support services over a five-week summer program to African American boys in jeopardy of failing the 7th grade. The overall achievement of students who attended the summer program drastically improved, according to Dr. Camille McKayle, provost at UVI.

The creation of the only all-boys public school located on the campus of North Carolina A&T State University has yielded impressive numbers. Established in 2003, African American males who hail from low-income backgrounds comprise 98 percent of the school’s population which boast a 100 percent graduation and college admission rate, according to Dr. William B. Harvey, who is dean of the School of Education.

In their junior year, many of the students take classes at the university and receive college credit.

“This is not new,” says Harvey, who added that lab schools were once popular on college campuses during the 1950s and 1960s and produced high achieving students.  He says that the time is ripe to duplicate these efforts at institutions in urban areas across the country.

“What this means is that we know the potential of what can be done,” he says.

Leslie V. Forte: the woman behind the name on the scholarship – Obituary