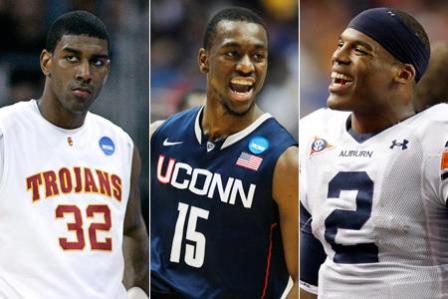 INDIANAPOLIS—Last year’s national runner-ups in football and men’s basketball came out the big winners in the classroom.

Of the 10 teams that reached the BCS football championship game and the men’s and women’s Final Four, only one finished with a graduation rate lower than 70 percent in the NCAA’s latest report, with Notre Dame producing better academic marks than national champion Alabama and Michigan coming in slightly ahead of national champion Louisville.

Those marks are based on four years of data collected from freshman athletes who entered school between 2003-04 and 2006-07 and earned their degrees in six years.

“More student-athletes than ever before are earning their college degrees, and we are gratified to see our reform efforts impact the lives of those we serve,” NCAA President Mark Emmert said in a statement. “We have even higher expectations for the future, but we are proud of the progress we have made.”

In a year that Emmert and the NCAA have been under intense scrutiny, the annual report gave Emmert plenty to tout.

Eighty-two percent of athletes in the 2006-07 freshman class earned their diploma, matching a one-year record. Graduation rates over the four-year span, hit 81 percent, also a one percentage point increase and another record.

Alabama, which has won the last two BCS titles and is ranked No. 1 this season, finished at 73 percent, ahead of football’s four-year average (70 percent). Notre Dame, which lost in January’s BCS title game, had a grad rate of 94 percent.

There were similar trends in basketball.

Michigan, the men’s runner-up, and surprising Wichita State both came in at 75 percent, both ahead of the four-year average in their sport (70). National champion Louisville was third at 70 percent, and only Syracuse (45) fell below the national average.

Three of the four women’s Final Four teams also topped the spot’s four-year average (85). Notre Dame came in at 100 percent with Connecticut and Louisville both at 92). California’s grad rate was 75 percent.

NCAA officials believe that academic reforms implemented over the past two decades have made an impact.

“We’re achieving great success through the academic performance program, and our student-athletes, coaches and administrators are working together,” said Walter Harrison, president at the University of Hartford and chairman and of the NCAA’s committee on academic performance. “They understand the program, and there are more student-athletes graduating.”

Critics contend that the NCAA numbers are not as accurate as those compiled by the federal government. They point out that college athletes receive more financial help than other students and have more access to tutors and other academic help, provided by the athletic department.

Even so, the federal report showed that college athletes were slightly more likely (65 to 64 percent) to graduate in six years than other students. It’s the third consecutive year college athletes hit 65 percent, still the record.

The numbers vary because the NCAA includes transfer students who leave school in good academic standing and earn a degree somewhere else. The feds do not count anyone who leaves their first school, regardless of whether the student or athlete actually earns a degree.

But not all was rosy, even within the NCAA’s own report, which showed some regression in the one-year statistics.

After making a 6-percentage point jump to 74 in last year’s report, all men’s basketball players in the one-year measure slipped to 72.9 percent this year. It’s still the first time Division I college basketball players have had to back-to-back years at 70 percent or better.

And according to the four-year federal numbers, only 47 percent of men’s basketball players and 58 percent of FBS football players graduated. Football Championship Subdivision players came in at 56 percent. Of the 35 sports that were measured, only three others baseball (48 percent), women’s bowling (53 percent) and wrestling (56) had grad rates lower than 60 percent.

The NCAA began tracking graduation rates with the 1995-96.