College Application Process Intimidating to Some 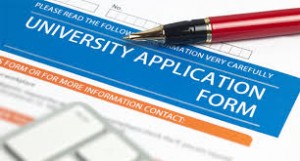 WASHINGTON ― Sometimes, all it takes is a $7 burrito gift card to get high school seniors to submit their college applications early.

President Barack Obama’s goal is that, by 2020, America will again have the highest proportion of college graduates in the world. To reach it, more low-income and first-generation students must earn a degree.

The first hurdle is getting these students to apply.

Even as a larger percentage of students from every income go to college compared to the late 1980s, some don’t even consider it. Cost is a huge factor, as is a lack of understanding about scholarships and student loans.

Even application fees can be financially taxing. And the process gets even harder if there’s no computer at home.

Many low-income students would be the first in their family to go to college. If their parents haven’t gone through the application process, there may be no one at home to help guide them.

Then there’ the big decision: Where to apply?

Some students think that “because of where we come from … we aren’t going to get in,” said Scheryl Duarte, 17, a Theodore Roosevelt student who wants to become a nurse. She had planned to join the military and hadn’t even considered college until a representative from Delaware State University spoke to her class.

“It’s hard,” Duarte said of the application process. “It’s really long and boring and it’s the same information over and over again.”

Much attention has been given to the issue of student loan debt and students failing to graduate from college, but higher-education leaders say college is still a good investment for individuals and the economy. Research has shown people who have a college degree are more likely to have a job and make more in lifetime earnings.

Yet, nationally, about half of high school graduates from families making below $18,300 enrolled in college in 2012 compared to about 80 percent of those whose families earned above $90,500, according to the College Board.

In Washington, where Duarte lives, only 30 percent of high school graduates go to college—a lower percentage than the number who drop out of high school—despite the city having the highest level of college attainment in the nation, according to the College Board.

Nearly all the students at Roosevelt qualify for free or reduced lunches.

To help create a college-going culture, a bulletin board near the school’s front doors features the names of seniors and the colleges they were accepted to. College acceptances are announced over the intercom.

As part of the American Council on Education’s American College Application Campaign, Chipotle gift cards were being handed out at Roosevelt. Now in 39 states, the campaign works with states, districts and schools to focus one week a year on activities to help students with the application process. Activities vary by school and are geared toward students who have completed a college-ready curriculum.

The mission is two-fold: assist students as they fill out applications during the school day and help spread enthusiasm about college. The program has enlisted retired teachers, business leaders, college admissions counselors and others.

Melissa Caperton, a senior associate at ACE, said confusion about application questions lead some students to put an application aside.

“Last week, I had a student ask me, ‘What does SSN mean?’ They didn’t know it meant Social Security number. If someone wasn’t there to help them with what seems a fairly simple question, they didn’t understand the lingo on the application, that student could have walked away from it,” Caperton said.

Generally, Copeland said most of the students he works with don’t say they’ve ruled out college. “When it comes to taking what’s in their minds and actually putting it on paper” that’s when you have problems, he said.

Roosevelt senior Antwan Williams, 17, wants to pursue an engineering degree. He says he would be first in his family to graduate from college, a dream his late father had for him.

“I first knew I wanted to go to college when my dad, he kept telling me that he always wanted me to be better than him because he never got the chance to go to college,” Williams says.

Zakiya Smith, strategy director at the Lumina Foundation, said research shows that one-on-one counseling can make the difference between someone applying for college and not. She said the ACE program and others like it help fill that need.

“Sometimes it’s not the Chipotle gift card, it’s the person being there as a resource. Right?” Smith said. “They know they have someone there who is going to help them with their applications.”

The White House says the United States ranks ninth in the world in the proportion of young adults enrolled in college, but has fallen to 16th in the number of certificates and degrees awarded to adults ages 25 to 34.

Education Secretary Arne Duncan said he believes most students are willing to sit down to fill out an application, but the application process itself “is too complicated. … Sometimes I feel like you have to have a Ph.D. to try and sort this out.”

Duncan said the financial aid application is now simpler, but it’s still overwhelming to determine where to apply and what it will cost. The department is developing a ratings system of colleges to help students navigate the system, but it has drawn pushback from many in the higher education community concerned about how the metrics will be developed.

Trey Miller, an economist at the RAND Corp., said application issues are the “low-hanging” fruit that are easier to tackle than development changes needed such as ensuring that students are ready for college and graduate.

“We know that there are a lot of students out there that are prepared for college, ready to go, would succeed in college. But for whatever reason, because they don’t have access to the kinds of tools and resources that traditional college going students do, they don’t end up going,” Miller said.