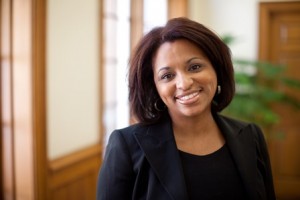 Wendy Greene says effective teaching is more than lecturing; it is engaging students in the subject matter through different methodologies so that the learning has personal meaning and application to students’ daily lives.

From an early age, Wendy Greene knew she wanted to be a lawyer.

Inspired by the late Supreme Court Justice Thurgood Marshall and the stories of her parents’ participation in student-led sit-in demonstrations for civil rights, Greene learned as a young girl that the law could be a force for bringing about social justice.

The civil rights struggle in the U.S. “just motivated me to think about being a lawyer and how the law can make such positive changes in our lives, and also how it can be a negative,” says Greene.

In addition to recognizing the law’s influence while growing up, Greene saw firsthand the positive impact that teachers had within her hometown of Columbia, S.C. The examples of her parents, grandmother, aunts and uncles, who were educators, planted the idea that she could combine teaching and law into a career.

Since 2007, after joining the faculty of the Cumberland School of Law at Samford University, Greene has pursued the law school teaching career she dreamed about as a youngster. As a tenured professor of law and director of faculty development at Cumberland, the South Carolina native has gained national recognition for her writing and research on topics related to race, gender and discrimination.

Greene has won awards at Cumberland for her teaching and research. Among the topics she has taught and written about include racial and gender inequality in the workplace; workplace grooming codes; comparative slavery and race relations law; historic and contemporary racial determination cases; multiracialism and the law; critical race theory; and race and gender in legal academia.

Greene’s research has been recognized for her advocacy for greater protection against racial discrimination stemming from the enactment and enforcement of workplace grooming codes. She has published three articles, “Title VII: What’s Hair (and other Race-Based Characteristics) Got to Do with It?” “Black Women Can’t Have Blonde Hair … in the Workplace” and “What Not to Wear in the Workplace: Hijabs and Natural Hair,” in legal journals.

“[Greene has] been certainly one of the intellectual leaders on the faculty,” says John Carroll, dean of the Cumberland School of Law. Her publications are nationally recognized. I think probably, of all the people on our faculty, she is the most sought-after speaker at national forums.”

With Samford University’s prominence in Birmingham, Ala.’s social, cultural and intellectual life, Greene has pursued law school and community service interests that reflect the city’s historic place in American civil rights history. “One of the great things she’s done is help us get tied in to the [Birmingham] Civil Rights Institute, which is an invaluable resource, not only for our students but for everyone else in the community,” says Carroll.

Wendy B. Scott, a North Carolina Central University law professor and former Tulane University law school faculty member, commends Greene for the initiative and foresight she showed while working as Scott’s research assistant during her law school years at Tulane.

“Even as a student [Greene] had started developing a scholarly agenda and would talk to me about it,” Scott says. “She had a plan. She executed that plan, and she’s become a very prominent person in the profession already.”

Greene says that, as an undergraduate at Xavier University of Louisiana, she took the opportunity to explore a wide variety of topics in literature and history that interested her. Although she considered the idea of earning a Ph.D. in literature, Greene came to understand that she could pursue her interests, such as the history of slavery in the Americas, as a law school student and eventually as a law professor.

“Basically, I took a lot of courses and did a lot of writing and researching on these issues when I was an undergrad,” she says, “and I figured there was a way to be able to transfer all of these things I was interested in to law school.”

Through her time at Tulane and at The George Washington University law school where she earned a master’s degree, Greene pursued the research and writing interests that continue to inspire her current scholarship.

Think TANKs in the United States

A Look at the College Tuition Perks at Starbucks, McDonald’s

New Mexico Tech recognized as ‘hottest in the war on terrorism’