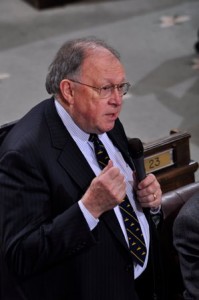 Rep. Larry Seaquist introduced the Pay It Forward program in an attempt to increase low- and middle-income families access to higher education.

OLYMPIA, Wash. ― Students in Washington State could be among the first to go to college without having to worry about paying tuition up front.

Instead, under a bill proposed in the House, they’d pay after leaving school in the form of a small, fixed percentage of their future income for up to 25 years.

“It enables people across a wide spectrum of incomes to simply go to college,” he says.

Similar legislation has been introduced in 17 states with proposals in the works in several others, according to Economic Opportunity Institute President John Burbank.

Oregon legislators passed a bill in 2013 that directed a higher education commission to determine whether a pilot program is warranted and, if so, to submit a proposal to the 2015 Legislature for consideration. Additionally, two similar bills have been introduced at the federal level, Burbank said.

But some in higher education are skeptical of the idea.

Chris Mulick, director of state relations for Washington State University, says that while he agrees college affordability is a major issue, he doesn’t want another program added into the mix when the already existing ones are lacking resources. Instead of investing the estimated startup cost of $1.5 million in Pay It Forward, Mulick says he would rather see the state’s need-based grant program fully funded, noting that 32,000 students were left without grants last year.

“Let’s fund what we have first,” he says.

As the state has allocated less money to higher education, tuition has climbed.

At the University of Washington, tuition increased 118 percent from 2002-2003 to the 2012-2013 school years, according to the Seattle nonpartisan public policy center Economic Opportunity Institute. Student loan debt, which recently crossed the $1 trillion threshold, is now the second-largest category of household debt in the U.S. behind home mortgages, according to the National Conference of State Legislatures, a bipartisan research and information center.

In Washington, the average amount of debt a college student carries is about $23,000, according to the Project on Student Debt.

Because of the numbers, those at the Economic Opportunity Institute researched other ways people could obtain higher education and came up with the Pay It Forward model, according to Burbank.

“If a student is accepted into a college, they should have no tuition barrier toward attending,” he says, adding that the intent of Pay It Forward is to work with other payment methods such as financial aid and grants. “This is sort of seen as the catch-all for those who haven’t been able to access grants or for those whose grants are insufficient.”

Under House Bill 2720, the Washington Student Achievement Council would be tasked with starting a Pay It Forward program in 2015 for up to five high schools in different parts of Washington that serve high proportions of low-income students. Students who choose to participate would receive money for their higher education program’s tuition and fees, less any financial aid and grant awards. They also would sign a contract obligating them to make contributions to the Pay It Forward trust fund after graduation or after leaving school.

Repayment would begin within a few years when the former student has a job. At that point, they would pay 2 to 5 percent of their income annually based on the type of higher education obtained. So, someone earning $30,000 a year would pay $1,200 per year or $100 per month at the 4 percent level, according to the bill, while someone making $100,000 per year would pay $4,000 annually or $333.33 per month. The percentage remains the same no matter what job a person holds. And, if someone loses a job, payments are put on hold. Seaquist says it levels the playing field for people who go into lower paying fields, such as teaching.

“If your heart takes you to a lower paying job, you should be able to go there,” Seaquist says.

As a person’s income changes, the amount paid per month would change but no one would pay for more than 25 years, according to the bill.

The idea of former students paying as long as 25 years is just one piece of the bill that bothers Karen Strickland, president of AFT Washington, a state federation affiliated with the American Federation of Teachers, AFL-CIO.

“This says we’ll let you go to school for free now and you can pay later,” she says. “My concern is once we establish an alternative to the need grant, we’re not going to go back.”

Strickland adds that if she had any inkling that college tuition would be reduced and that additional funding would be given to need grants, she might not be so concerned. But she doesn’t see that happening any time soon.

“Nobody has given me any reason to believe we’ll turn it around,” she says.

Seaquist acknowledges the startup money would come from the same pot as money for need grants, but says if the program were to expand, the Pay It Forward trust fund would eventually make the program sustainable without state dollars.

Seaquist says he’s pleased the bill passed out of the House Committee on Higher Education with bipartisan votes. He said he’s not sure what will happen to it in the Appropriations Committee but that he’ll fight for it.

“It’s on my short list of things I really want to get done,” he says.