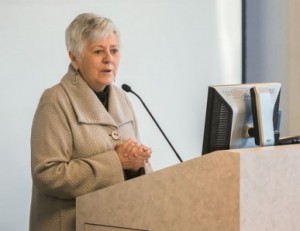 University of Iowa President Sally Mason, who has apologized for her controversial remark about sexual assault, says she hopes that in the future “we can look back on this time as maybe a breakthrough moment.”

IOWA CITY, Iowa ― As much as any college administrator could be, University of Iowa President Sally Mason was prepared for the growing nationwide pressure to curb campus sexual assaults.

An experienced leader with a calm but determined approach, Mason had taken steps that made the 30,000-student university a model on the issue. Following a high-profile assault involving football players in 2007, Mason hired an administrator to coordinate help for victims and mandated prevention training for employees. And she had personal experience, having to fight off an assailant while an undergraduate in 1970.

Yet one statement she made last month—that ending sexual assault was probably unrealistic “just given human nature and that’s unfortunate”—ignited a firestorm. A student group called it a hurtful remark that exemplified the university’s insensitivity. Mason quickly apologized and held a student forum on the issue, but she was still chastised by the university’s governing board and directed to improve communication with its members.

With national statistics indicating that as many as one in five women are assaulted during college, the issue has become explosive, never far below the surface.

Activist groups have formed at universities from California to Massachusetts to raise awareness, deftly using social media to organize. After Mason’s quote appeared in an interview with the student newspaper, word spread quickly over Twitter and Facebook.

“This was an issue that so many people wanted to talk about for such a long time but hadn’t been provided the opportunity or space to do so. That’s why the movement snowballed the way it did,” said senior Stacia Scott, a protest organizer.

But one national free speech group complained that the reaction was going too far and making reasonable discussion impossible. Some said that Mason, a biologist by training, just seemed to be making a candid point.

“We didn’t really think it was going to cause the uproar that it did,” said Kristen East, editor-in-chief of the college paper, the Daily Iowan.

Mason said the episode has been painful but could have a positive result.

“I don’t enjoy listening to students telling me my words were so hurtful. That was never the intention as I have said and I will continue to apologize,” she said. “But by the same token, as we get further and further along in this work, we can look back on this time as maybe a breakthrough moment.”

Before Mason’s remark, students had noticed an increase in the number of campus-wide emails sent by university police this year after reports of sexual assault.

The campus is largely safe, set in a leafy college town of 67,000 on the Iowa River rather than in an urban area with street crime. Many of the assaults involved acquaintances and took place in residence halls or fraternities. One report about an assault in a tunnel near the river alarmed students.

Some critics said the university’s warnings put too much focus on the victims by warning women not to walk alone or to binge drink—and not enough on perpetrators.

University officials said the increase resulted from a policy change to start sending warnings about incidents involving acquaintances. The number of sexual offenses reported to campus police dropped in 2013 to four from eight. But the Rape Victim Advocacy Program in Iowa City said there were 117 university-affiliated calls involving sexual assault, stalking or harassment last year.

A January report from the White House Council on Women and Girls cited a 2011 national research survey that found 20 percent of women reported being victims. Experts say it is impossible to know whether the prevalence has gone up, since it is a vastly underreported crime.

Since arriving in 2007, Mason has won praise for helping freeze tuition, for rebuilding the campus after a devastating 2008 flood and raising hundreds of millions of dollars. Following her remark, she proposed a six-point plan to further combat sexual assault, calling for the most serious offenders to face expulsion instead of suspension and additional funding for prevention initiatives.

Protesters such as Latisha McDaniel, a research assistant who held a sign Monday reading “We Deserve a Rape Free Campus,” praise Mason’s quick response to their outrage.

“When I first heard it, my mouth dropped,” she said. “But I’m actually surprised and supportive of what she’s done since.”

But the campus free speech group, the Foundation for Individual Rights in Education, said Mason’s only mistake was in apologizing.

“Ultimately, a president who is willing to freely discuss the real challenges of dealing with sexual assault on campus will do far more for the safety and well-being of students at the University of Iowa than will a president who, to protect his or her career, refuses to stray from the officially sanctioned party line,” the group wrote on its website.

The groups of activists at campuses across the country hope to take advantage of the threat of increased federal enforcement by the U.S. Department of Education of the Title IX anti-discrimination law.

The department in 2011 warned schools of their legal responsibilities, including the need for immediate investigations that don’t rely on criminal cases to move forward. Its Office for Civil Rights has opened more than 40 pending investigations related to campus sex assaults.

Alexandra Brodsky, a Yale law student who filed a federal complaint against Yale after her rape by another student, proudly noted that President Obama cited many of the activists’ priorities when he organized a White House task force in January on campus sexual assaults.

“The louder you are, the harder it is to ignore you,” she said.

NCORE Kicks Off with Call to Activism