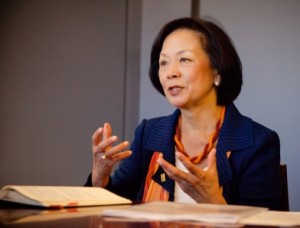 Dr. Rosalind Chou, assistant professor of sociology at Georgia State University, says that sexism and common misconceptions about racism lead to some of the hurdles faced by women in leadership roles in higher education.

It’s a question most university chief executives must answer at least once during the height of winter: Do we keep the doors open or closed on a blustery and bitterly cold school day? The answer to that question rarely makes national news.

But when Dr. Phyllis Wise, chancellor of the University of Illinois at Urbana-Champaign opted to keep the doors open despite painfully frigid temperatures earlier this year, Wise, an Asian American, was blasted on social media by students tweeting profane laden racist and sexist rants.

“In room with Phyllis Wise, Adolf Hitler and a gun with one bullet. Who do I shoot,” read one.

“Phyllis Wise is the Kim Jong Un of chancellors,” read another.

“Asians and women aren’t responsible for their actions,” one read.

And those comments were some of the tamest. Others made vulgar references to her anatomy and mocked stereotypical speech patterns of Asians speaking broken English.

Wise could not be reached for comment. But the avalanche of offensive comments raised questions about the challenges faced by women and, specifically, women of color who hold leadership positions at the nation’s colleges when they make unpopular decisions.

“My observation from working with women presidents and the research I’ve been doing with HERS and some partners suggests that there continue to be challenges with women presidents just because of a sense of women being less credited with being appropriate for a leadership job,” says Dr. Judith White, president and executive director of Higher Education Research Services (HERS), an educational nonprofit organization that provides leadership development for women in higher education administration. “They become vulnerable to the kind of attack that might not happen if it were a male president.”

Dr. Rosalind Chou, an assistant professor of sociology at Georgia State University, who studies race, ethnicity, gender and sexuality, says the Wise incident highlighted a common misconception about racism and people of Asian ancestry in America.

“It’s assumed that Asian Americans are doing very well and don’t face discrimination compared to other groups that are racial minorities,” says Chou, author of Asian American Sexual Politics: The Construction of Race, Gender, and Sexuality.

She says that because of this misperception, some people feel empowered to openly make derogatory comments about Asian Americans and take liberties that they wouldn’t with other groups like, say, African-Americans.

“The stereotype of Asian people is that we are passive,” she says. “There are these stereotypes that lead to these openly hostile, openly racist comments.”

Chou says many Americans of Asian descent have to contend with a “forever foreigner” mentality, a belief that they are foreign to this land even if they and their forbearers have lived here for generations. That, she says, explains some of the parodies tweeted about Wise.

Like other women of color, she adds, Asian American women in academia face an intense pressure to succeed.

“For women in academia in general it’s already quite difficult,” she says. “They are less likely to be tenured. They are already under scrutiny and under a microscope to be pioneer. Often Asians are not seen as leadership quality because they are too into cooperation. So there’s that and then there’s women in academia.

“It’s still an old boy’s network. Combine the two and you now have race and gender. For people of color and gender minorities they are viewed as the face of the entire group. Their missteps are associated with gender or race. Whereas with the dominant group any mistake they make is different.”

Marybeth Gasman, a professor of higher education at the University of Pennsylvania, shares Chou’s sentiments.

At Penn, she says, the school almost never closes on account of bad weather ― and she’s never noticed the president, a White female, being demonized.

“I get students not wanting to have school. I have a whole bunch of students I’m Facebook friends with. I watched my students complain. But they didn’t say anything nasty. Most of the people I watch didn’t say anything. There might have been have some complaints but he probably wouldn’t have been referred to as communist or a Nazi.”

She says we may be seeing more incidents of this kind.

“There are more Asian American presidents and chancellors popping up and we might see more of this coming up,” she says.

Gasman says she believes it is symptomatic of a wider problem about race and ethnicity in this country.

“We have a country where minorities are rapidly becoming the majority and that fact scares a segment of the White population,” says Gasman. “So we’re seeing a lot of racial incidents especially as relates to Latinos, Asians and Blacks. I think part of it is some Whites feeling their power is dissipating and I think some of it has to do with the fact that we have a Black president and some people uncomfortable with that, and part of it is because we might have a female president.”