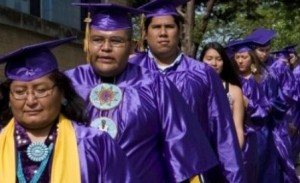 A new study reveals that American Indian students want to pursue higher education, but they are not adequately prepared.

The message that earning a college degree provides a proven path to middle-class employment and stability has been pushed heavily toward young Americans in recent years, particularly as the Obama administration has established national goals for college degree attainment and challenged Americans to ensure that students are college- and career-ready when they finish high school.

The ACT study is based on data from approximately 14,217 ACT-tested 2013 high school graduates who identified themselves as being of American Indian race and ethnicity, according to the ACT. During ACT registration, students are asked to provide information about race and ethnicity, high school course taking and postsecondary goals.

Scott Montgomery, the ACT vice president of policy, advocacy and government relations, said the disconnect of post-high school aspirations in relation to preparation is particularly pronounced in ACT research on American Indian students. He added that, while the “results paint a stark picture, they can help us all identify appropriate ways to improve success” for American Indian students.

“One of the things we want to do is not just shine the light on the gap, but we also want to help people think about what are the policies, programs, and the solutions we can put in place to [bridge] that disconnect,” Montgomery told Diverse.

“And right now, in this particular population, that disconnect is pretty significant,” he added.

Dr. Dorothy Aguilera-Black Bear, vice president of research and sponsored programs at the American Indian College Fund, said it’s important to understand that the “key feature of K-12 education for American Indian students has historically been remedial education so [American Indians have] been left out of even what is considered at best the kinds of education and learning opportunities that most White students would have available.”

While tribal K-12 schools have often lacked the funding they need to be effective, Aguilera-Black Bear said the public schools in rural and poor districts that American Indians  attend have poorly-served that population. “Our students always end up in those high-stakes testing type [public] schools and the pedagogy used is not how they best learn,” she noted.

Nonetheless, many American Indian students who have experienced success in higher education have done so at tribal colleges and universities where the SAT or ACT is not required for admission. Aguilera-Black Bear said the tribal institutions succeed because they are “providing innovative developmental education programming to offset the college readiness challenges for first-generation and first-time entering students.”