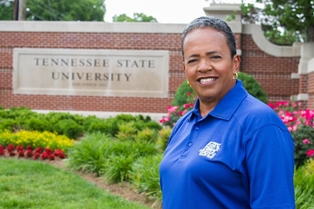 At one point, Catana Starks also served as coach of the men’s and women’s swimming and diving teams at Tennessee State University, her alma mater.

Catana Starks knows all about beating the odds. Twenty-eight years ago, she was given the task of building — from scratch — the men’s golf program at Tennessee State University. In spite of meager beginnings, Starks persevered and became the first African-American woman to coach an NCAA Division I men’s golf team.

It’s Starks’ hope that the film sends a resounding message to viewers — that dreams come true for those who diligently pursue their goals.

“For anyone who’s interested in accomplishing something in their life, the movie shows that, with commitment and hard work, you can achieve whatever you desire,” says Starks.

Growing up in Mobile, Ala., Starks learned how to overcome adversity long before she arrived on the TSU campus. As a child, she suffered from asthma and was told by doctors that she would never have a physically active lifestyle.

She proved the doctors wrong. Not only did Starks become a swimmer, she eventually became a lifeguard and, later on, served as coach of the men’s and women’s swimming and diving teams at TSU, her alma mater.

Encouragement from family, Starks notes, made a huge difference.

“At a young age, my mother and grandmother instilled in me the belief that I am not limited by my circumstances,” says Starks. “What the doctors said about me just wasn’t true. I learned how to swim and water ski.”

When Tennessee State became a member of the Ohio Valley Conference in the late 1980s, Starks’ resiliency and resourcefulness would be thoroughly tested. TSU dropped swimming and added golf as a replacement. Starks was asked to take the reins of the new program, which started play in 1987.

The switch dictated that Starks make an arduous transition from coaching swimming, a familiar sport, to coaching golf, a sport that she did not have any experience coaching.

“I like a challenge,” says Starks, who was a classmate of Olympic track legend Wilma Rudolph. “I made every effort to learn everything I could to help the program grow and succeed. I can never resist having a challenging task to work on because it puts me in position to put my best foot forward.”

During her 18 seasons as golf coach, Starks, who has a doctorate in educational administration from TSU, created a climate for winning and personal growth. In her final season, the Tigers won the 2005 PGA National Minority Golf Championship with a record-setting 24-under 840. Three of Starks’ former players have emerged as prominent figures in the sport:

• Sam Puryear is currently the director of golf operations at Queen’s University of Charlotte in North Carolina. Prior to that, Puryear was at Michigan State from 2007 through 2011, where he made history as the first Black head coach of a major Division I golf program. In 2008, Puryear was voted Big Ten Conference Coach of the Year and the Spartans won the conference title.

• Sean Foley is an instructor who works with the top players in golf. Foley is best known as the swing coach for Tiger Woods.

• Robert Dinwiddie, an English golfer who took high medalist honors at the 2005 nationals, was an All-American at TSU. After college, Dinwiddie turned pro and played on the European Tour and the Challenge Tour.

In the late 1980s, TSU’s football, track and field and basketball teams were receiving most of the financial focus, so, for Starks, securing adequate funding for a fledgling golf program was challenging.

Puryear, a member of Starks’ first recruiting class in 1988, has vivid memories of the program’s early years. Transportation was an issue for some, so Starks frequently stuffed her compact-sized Toyota Tercel with students and golf gear so that players would have a way to get to and from practices. The team had two practice sites: the Ted Rhodes Golf Course in Nashville, Tenn., and an on-campus practice area that was far different from anything the players had ever seen.

On TSU’s makeshift driving range, players stood at the top of a hill and hit balls that were buried in thick grass. The down slope was about 200 yards, but the most aggravating challenge came on golf shots that landed beyond the grassy area. At the bottom of the hill was a sizable and paved parking lot. As a result, Puryear and his teammates did more running and walking than they had ever done before as golfers.

“The grass was four to five inches high,” recalls Puryear. “Balls that landed on the parking lot rolled another 400 to 500 yards. So we spent a lot of our time shagging balls. We weren’t allowed to use the football practice field because the football coaches were afraid that their players might step on a ball and injure themselves.”

Even when the golf program was in start-up mode, Starks convinced high school golfers that TSU was the place to be. Many of the early recruits were fairly accomplished golfers who had competed in prep competition and junior tournaments.

In her pitch, Starks placed heavy emphasis on TSU’s academic offerings and the Tigers’ position as a Division I team, which meant that prospective players had the opportunity to compete against some of the top college teams in the country. Being a new program was an added bonus because prospects were intrigued by the idea of getting to play right away.

Guaylon Arnic was sold on the program during his 1991 recruiting visit. Arnic, who posted a top 20 finish at the state high school championships in Ohio as a senior, was recruited by Jackson State, Florida A&M and Kentucky State.

“I got the opportunity to meet the team and observe how things were done,” Arnic recalls. “I was so impressed with Coach Starks and how she interacted with the players. She was extremely hands-on. It was easy to see that everybody had the desire to help each other get better.”

The first recruiting class for the golf team was all-Black, but, the following year, Starks added Canadian players, creating a “melting pot” roster. Eric Wilhite, who played the previous season, explains that racial diversity was not a problem for the team.

“We [Black players] didn’t get upset about it,” he says. “Among us, there was a sense that all of us needed to step up our games. Nobody wanted to have their spot taken.”

Though Starks bonded with her players over golf, there was more to the coach-player relationship than the game itself. Life lessons were taught and have not been forgotten.

“Coach always preached about the importance of academics, career and being a good person,” says Puryear. “When it comes to doing what’s needed to be successful, it’s always worth it to listen to her.”

One of Starks’ strengths as a coach, says Arnic, was her ability to convince players that a strong work ethic serves as a blueprint for excellence.

“Preparation, accountability and being organized, that’s what she talked about a lot,” he says. “She’d tell you the amount of work you’d have to do to get from point A to point B. Coach always reminded us that getting to point B wouldn’t be easy, but it was definitely an attainable goal.”

Wilhite admits that, had Starks never approached him about coming to TSU, it’s doubtful that he would have played college golf.

“One of the life lessons I remember most is that, when you make a commitment, you give it your very best effort — always.”

Because Starks ended her coaching career as a national champion, some might presume that it was her crowning achievement. She disagrees. Though Starks relishes the memories, she says bringing a national championship trophy to Nashville doesn’t come close to being her greatest coaching moment.

“For me, it’s always been about helping players to believe in themselves and helping them to learn to do the things it takes to become better players, better fathers, better husbands and better professionals,” says Starks, who retired in 2012 as a professor and chair of TSU’s Department of Human Performance and Sports Science.

“As a coach, there were times when I was the strategic thinker, listener, motivator and enforcer; I’ve even had to handle some anger management situations,” she adds. “Coaches are teachers, and when you have a passion for coaching, it carries you forward with each team you work with.”