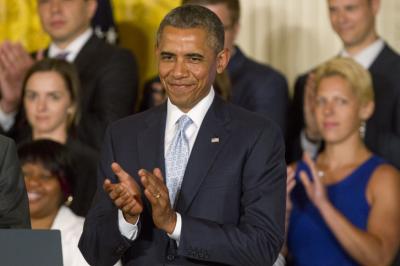 President Obama said that “no hardworking young person should be priced out of a higher education.”

Nearly five million borrowers of federal student loans will soon have their monthly repayments capped at 10 percent of their income, thanks to an executive order signed by President Obama at the White House yesterday.

The new guidelines are aimed at helping to ease the burdens of paying for a college education.

“I’m only here because this country gave me a chance through education,” Obama said at a ceremony in the White House East Room, surrounded by student loan borrowers. “We are here today because we believe that in America, no hardworking young person should be priced out of a higher education.”

“I applaud President Obama for using the power of the pen to help ease student loan debt,” said Dr. Wilson in an interview with Diverse. Wilson said that the new reforms will likely benefit minority-serving institutions like Morgan State and help to decrease the overall student default rate on federal loans.

“I am very encouraged. This is a good first step in the right direction,” he said. “The president is truly trying to make college affordable and accessible to all.”

In 2010, the Obama administration announced that students who borrowed federal loans after October 2007 would not have to pay more than 10 percent of their monthly income. But yesterday’s sweeping provision by the administration now applies to anyone who has ever borrowed a federal student loan in the past.

“We actually don’t know the costs yet,” U.S. Secretary of Education Arne Duncan said. “We’ll figure that out on the back end.”

Obama used yesterday’s gathering to also lend his support to pending legislation sponsored by Sen. Elizabeth Warren, D-Mass., that would allow college graduates with heavy debts refinance their loans. The bill, which the Senate is expected to debate next week, faces fierce opposition from Republicans.

“This should be a no-brainer,” Obama said, adding that over the past three decades, the average tuition at a public four-year college has more than tripled.

According to the U.S. Department of Education, about 71 percent of students earning a bachelor’s degree graduate with debt, which averages to about $29,400. In the wake of the new guidelines, Obama has also directed Duncan to renegotiate contracts with federal student loan providers.

“While today’s step is valuable, broad action to lower the cost of student loans and improve repayment options will require action by both Congress and the administration,” said Molly Corbett Broad, president of the American Council on Education. “We look forward to working with them to accomplish this goal.”

Dr. Walter Kimbrough, president of Dillard University in New Orleans, said that the changes to the federal student loan program and the proposed Senate legislation surrounding the refinancing of student loans are both “good moves in the right direction.”

Still, both Kimbrough and Wilson acknowledge that additional measures have to be put into place to help struggling graduates pay for a college education.

“These kinds of things will help out in the long term, so that students don’t feel the same kind of pressure paying back their loans,” said Kimbrough.

At 4:00 p.m. ET today, President Obama will take part in his first-ever Tumblr Q&A to answer questions about education, college affordability and reducing student loan debt. Submit your questions for the president at ObamaIRL.tumblr.com.