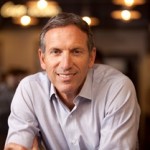 Starbucks president and CEO Howard Schultz said that “we can’t be a great company, a great enduring country, if we’re constantly leaving people behind.”

Like tea with honey, working at Starbucks has just gotten a little sweeter thanks to a new program that promises to pay employees’ college tuition during their junior and senior years.

The company’s new College Achievement Program is being offered in collaboration with Arizona State University through the university’s online degree programs.

The initiative is about providing “hope and opportunity” at a time when educational inequalities persist between rich and poor, Starbucks president and CEO Howard Schultz said in announcing the program Monday.

“This is not about PR,” Schultz said during an emotional company meeting at The Times Center in New York City that featured a few hundred select employees and managers — many of whom spoke about how “life” had gotten in the way of their college dreams and how thankful they were that their employer planned to pick up the tab on the last half of their four-year degrees.

“This is about the future of our company doing what’s right for our people and sending a message … that we can’t be a great company, a great enduring country, if we’re constantly leaving people behind,” Schultz said.

While the bachelor’s-degree-holding Starbucks barista has become emblematic of what some argue is the questionable value of a college degree, ASU president Michael Crow said the new Starbucks college program is about more than getting a degree to find a job.

“It’s unfortunate that people think of educational attainment as only some pathway to a job,” Crow said. “It’s about you finding a way to take your mind and your body and your spirit wherever you want to go.”

Crow also defended the online program at ASU, saying online degree-holders can compete “pound-for-pound” against graduates from other institutions.

“This is not some simple way to get a college degree,” Crow said. “This is a way for an individual who is working to have access to a world-class education with every tool that human beings have developed to this point, to provide for that interface.”

Schultz said the new Starbucks college program is aimed at the “majority” of the 100,000 or so Starbucks employees that he said have either not been to college or do not have a college degree.

U.S. Secretary of Education Arne Duncan hailed the Starbucks-ASU partnership as a potential game-changer that could lead other companies to follow suit and subsequently help the United States increase its level of college degree attainment—a longstanding goal of the Obama administration.

“If you guys can do this well,” Duncan said, “you’re going to advance our entire country.”

Duncan praised ASU for having completion rates for minority students that are “off the chart” for Native Americans/Alaska Natives, Hispanics and African-American students.

For the most part, that is in fact significantly higher than the completion rates for the same groups—37.5, 35.1 and 43.7, respectively—at institutions with similar admission rates.

One ASU official said the retention rate from semester to semester for ASU’s online courses is 90 percent—among the highest in the nation.

Schultz said ASU was selected to partner with Starbucks because the institution stood out among other would-be collaborators in terms of its ability to provide the technological support and know-how to make the program work. Starbucks employees who take advantage of the program—which functions as a reimbursement program for those who work 20 hours or more—must enroll in an online degree program offered by ASU.

That’s just fine with Starbucks barista Michael Bojorquez, 23, who said he has been “pacing” himself to slowly earn his associate’s degree in sociology from Pierce College in Woodland Hills, Calif.

“I feel like it’s an opportunity I cannot miss,” said Bojorquez, who said he works 60 to 70 hours a week as a barista at two Starbucks sites to make ends meet.

“It’s going to enable me to take off the burden of paying for books, education, and focus on studying and getting it done,” said Bojorquez, who described himself as the son of immigrants who are strong believers in education.

Bojorquez said going to college online will be nothing new because he’s completed courses online before at Pierce.

He said going to school online is more convenient than physically going to campus because it enables him to bypass the need to commute or find parking.

Bojoquez said that, once he starts the online program at ASU, doing his online coursework will be a simple matter of staying at Starbucks a few extra hours after the end of his shift, turning out his laptop and accessing his courses by using the free wireless Internet service at Starbucks.

“The online courses are going to be much more flexible with my work schedule,” Bojorquez said.