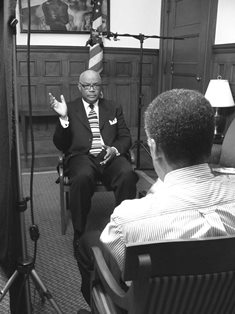 Kenneth E. Reeves, facing front, discusses his trailblazing role as a student at Harvard College and later as the first African-American mayor of Cambridge, Massachusetts. (Photo Courtesy of The HistoryMakers Collection at the Library of Congress)

Preservation of The HistoryMakers, the single largest archival collection of African-American oral histories, is now assured after its acquisition by the Library of Congress.

“Things have been so marginalized with Black history,” says Julieanna Richardson, founder and executive director of The HistoryMakers, a nonprofit research and educational institution committed to preserving, developing and providing access to thousands of African-American video oral histories. “People like learning new things and looking for areas that have not been well researched.”

Founded in 1999, Richardson envisioned conducting 5,000 interviews three to six hours in length that document the lives and stories of prominent African-Americans as well as people who are witnesses to history. The collection currently comprises 2,600 videotaped interviews with people in a diverse range of fields, including science, the military, art, religion, style and politics.

In late June, it was announced that the current collection and all future HistoryMakers interviews will be permanently housed at the Library of Congress.

“We like being able to record history in first-person accounts. This has been a tradition at the Library of Congress,” says Mike Mashon, head of the Library’s Moving Image Section. Every interview done to date and in the future will be available for researcher access in the Moving Image Reference Center.

“The depth, breadth and variety of the people that they talk to makes it a very astonishing collection,” says Mashon.

There are well-known individuals such as B.B. King, Maya Angelou, Senator Edward Brooke and General Colin Powell and unfamiliar names, such as Amazon Brooks, a laundress who voted in every presidential election from 1920, the year that women were granted the right to vote, to 2004. Mashon noted that this provides insight into the history of the 20th century not readily available in research.

“I’ve always been drawn to those kinds of cultural and social histories that talk about the lived experience and what it was like for the average person to live during a particular time,” says Mashon. “It’s always interesting to read histories of people doing … publicly impactful things. But I think there’s so much more that can be learned by history at the ground level. That’s one of the things a project like The HistoryMakers does.”

Among the 2,600 interviews is a 2001 interview with Illinois State Senator Barack Obama, who spoke about his family as well as his desire to make an impact on African-American history. Richardson notes this is rare and unique documentation of the president prior to his emerging on the national scene.

“We do what are called life oral history interviews that document people’s life and time and their families,” says Richardson. “What we’re hoping is that out of [these] quiltworks of stories will emerge a new and more accurate history, maybe part of a movement of others with lost American stories.”

For Richardson, who has spent the last 15 years working on The HistoryMakers, there is a sense of ease knowing the collection will be permanently preserved. At present, the collection includes 9,000 hours of content, and more is being sent to the Library of Congress, the largest facility in the world for audiovisual preservation material, on a monthly basis.

The Library of Congress also houses extensive slave narratives and Richardson says she feels a sense of satisfaction from a spiritual standpoint knowing the stories of slaves and their descendants are now under one roof.

At the inception of The HistoryMakers, there was an urgent need to swiftly preserve the stories of older individuals. In fact, 400 people among those interviewed to date, including Angelou and Ruby Dee, have passed away. The focus is now on younger people, with funding in place to interview people in media.

Cataloguing is currently in process and the material is being “ingested” into the Library’s digital archives. By fall, the archives should be available in the reference center in Washington, D.C. Individuals doing research will be able to access all the information.

Work is also in process to make some of the content available online. The HistoryMakers is working with Carnegie Mellon University to enhance the digital archive, which currently has 600 interviews offered on a subscription basis. At present, there are users in 51 countries. Howard University, the University of Illinois, the University of Missouri and Northwestern University are going to be using it in the classroom.

“There is so much that is not known within the community and outside of the community that this will be a rare inside look into African-American life, history and culture,” Richardson says. “Missing pieces of history would have been missing forever had we not recorded them.”

When It Comes to Health, Environment Remains a Major Factor