Reflections on the Underemployment of College Graduates - Higher Education

Reflections on the Underemployment of College Graduates 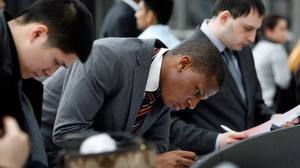 Most people — and especially parents of 20-something college graduates — know that the job market is particularly tough right now for recent college grads. But so tough that about half of them are either unemployed or underemployed?

That is what analysts for the New York Federal Reserve Bank of New York calculated, in a January, 2014, report, “Are Recent College Graduates Finding Good Jobs?” Defining “underemployed as working in low-paid jobs that don’t require college degrees, the analysts, Jaison R. Abel, Richard Deitz, and Yaqin Su, found that roughly 6 percent of recent college graduates, aged 22 to 27, were unemployed at the beginning of 2013 and 44 percent were underemployed. The unemployment figure has likely dropped since then, along with the overall drop in unemployment. But it’s quite possible that underemployment — the percentage of college grads who are in jobs that don’t require college degrees — hasn’t changed much.

Curiously enough, this New York Fed study was largely a rebuttal to the popular notion that the job market is much worse for college grads today. The authors looked at two decades of data and found that the combination of unemployment and underemployment is roughly the same today as it was for college graduates in the early 1990s who also had to seek jobs during a recession. By age 30, the majority of the 1990s cohort eventually found better work, and the same could happen for the current crop of college graduates.

But the authors also pointed to some ominous signs. They drilled down into the data of the underemployed and noted that it’s more likely for recent graduates to be in a low-wage or a part-time job than in the past. In other words, there’s a smaller share of college graduates in well-paying non-college jobs, such as electrician, dental hygienist or mechanic. And there’s a rising share of college graduates in the lowest paid of the non-college jobs, such as bartender, food server and cashier. That could make it harder for these young adults to transition to higher skilled jobs in the next few years. Time will tell.

Harvard professor Richard B. Freeman, one of the leading U.S. labor economists, wrote that he believes things are also worse now for American college graduates because of international competition. “The college graduate situation has a global dimension — 6 million bachelor’s graduates in China that affect the U.S. market as well — which is very different than in the past,” he wrote.

It’s worth pausing a moment to understand how economists think about underemployment, an admittedly fuzzy term. The New York Federal Reserve used the Department of Labor’s O*Net surveys. If at least 50 percent of the respondents working in a particular occupation say it requires a college degree, then the New York Fed labeled the occupation a college job. And it called a college graduate “underemployed” if he or she worked in a job for which less than half the respondents said a bachelor’s degree was necessary. Under this definition, every college-educated real estate broker, registered nurse and Shakespearean actor is classified as underemployed.

Sometimes fields change and become more sophisticated. Twenty years ago, some jobs didn’t require college degrees that now do. Journalism is one where many people didn’t have a college degree a couple generations ago. Now, even O*Net says reporters need a college degree. One question interesting labor economists is whether the employers hiring young adults can be more selective than the job itself warrants, and can demand college degrees simply because they have an excess of college graduates to choose from. Many elementary schools in the New York City area, for example, have the luxury of being able to demand that any teacher’s aide have a B.A. But O*Net says that the degree isn’t necessary for that job. Over time, that could change, if enough teacher’s aides respond that a college degree is necessary to be a teacher’s aide, even though you could perform the job superbly without one.

“In recent years, we have increased credential requirements for jobs that haven’t changed that much,” said Richard Vedder, director of the Center for College Affordability and Productivity and an economics professor emeritus at Ohio University.

Vedder’s own analysis of underemployment in January 2013 preceded the NY Fed’s research, but came up with similar findings — that 48 percent of college graduates are underemployed. In “Why Are Recent College Graduates Underemployed?” by Vedder, Christopher Denhart and Jonathan Robe, the authors used the Bureau of Labor Statistics’ “Education and training assignments by detailed occupation, 2012” to determine which jobs would make a college-educated person “underemployed.”

Seeing big numbers like that can make one’s college-educated eyeballs pop. But the New York Fed points out that a third of all college graduates — not just recent ones — have always been categorized as underemployed. Think of all the college-educated real estate brokers, ad salesmen, nurses. Not so tragic. Some earn very good livings.

A new data set, released on July 8, 2014, from the Department of Education, also helps flesh out the picture of employment prospects for recent graduates. The data, from the Baccalaureate and Beyond surveys, looked at the employment of 2008 college graduates four years later, in 2012. It found that 7 percent were unemployed and 8 percent had dropped out of the labor force and weren’t looking for work. About 16 percent were in grad school, some of them working part time, some not. Of the remaining 69 percent who were working and not in grad school, 15 percent were in one or multiple part-time jobs. I think we can all agree, any college graduate in a part-time job is underemployed.

The Study of Whiteness

Dori Maynard Was a Champion for Diversity in Journalism